Preveli Monastery is located 37 km south of Rethymno, in a landscape of unique beauty. It is one of the most famous monasteries on the island and overlooks the Libyan Sea and an exotic palm forest, next to which flows the Great River.

It consists of two separate building complexes, “Piso” and “Kato Monastiri” which are about 2 km apart. A visit to the monastery of Preveli is primarily of historical and cultural interest. The visitor will have the opportunity to enjoy the incredible beauty of the landscape and to admire the samples of ecclesiastical art that exist in the temple.

Many legends are associated with the founding of the monastery during the Venetian period, like most Cretan monasteries. At the time, there were two larger monasteries and many smaller ones on this location, which had to be united to create the large monastery of Preveli. A series of enthusiastic and energetic abbots made it one of the richest monasteries in Western Crete. Preveli also contributed a lot to all the liberation struggles of the island against the Ottomans.

The monastery complex of Preveli

“Kato Monastiri” is the first building we meet when we arrive from Rethymno and is dedicated to Agios Ioannis Prodromos. Today it is completely abandoned. The “Piso Monastiri”, is the one most known to visitors, and is dedicated to Agios Ioannis the Theologian. Unfortunately, none of the original building structures survive, since those that were not destroyed by the Turks, were deformed by the renovations.

The church is a typical example and the katholikon we see today is part of a building that dates back to 1835 when the island was under Egyptian occupation. In terms of the monastery complex, Preveli does not follow the fortress form. That is because the monastery developed during the years of Ottoman rule, during which there was no reason for fortification since the Ottomans had eliminated the fear of pirate raids. The katholikon is located in the centre of the small enclosure and around it are built the cells of the monks, literally buried in the rocks, due to the slope of the ground. Because the flat space was not sufficient, the south side was also used and a retaining wall was constructed as well as the second level of buildings lower than the first. Thus the roof of the southern buildings was used as the courtyard of the temple and the buildings on the north side. Immediately after the entrance, we notice that there are separate access corridors to the north and south level and in this way, the spaces intended for different uses were completely isolated. 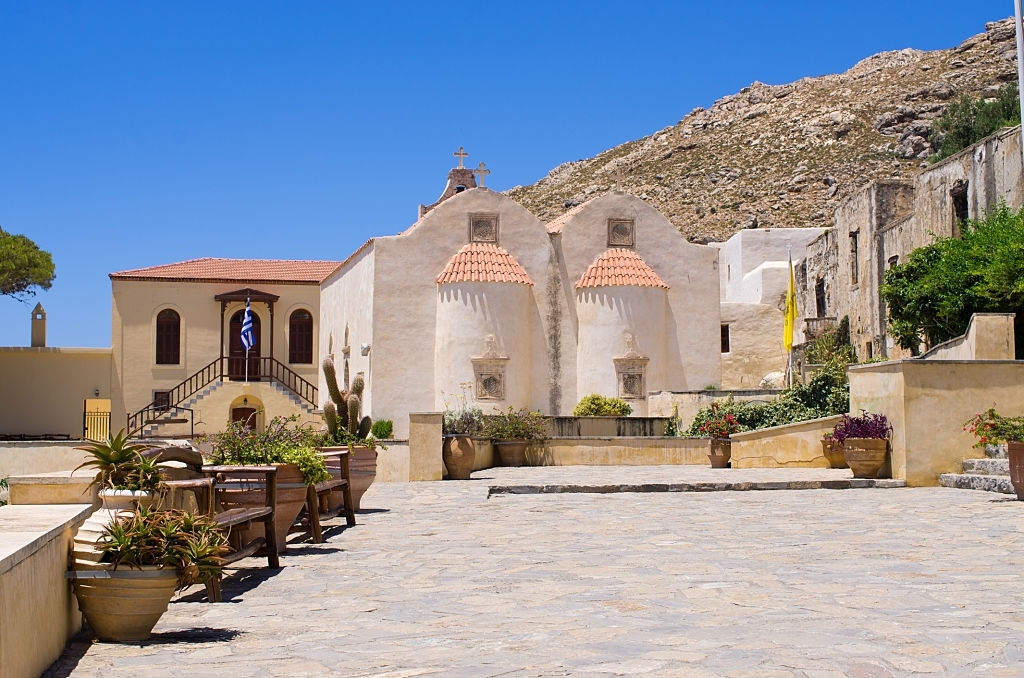 Among the most valuable relics of the monastery is the image of Christ the “King of Kings”, work of the painter Mix. Preveli (1750) and the icon of Saint John the Theologian (13th century), with the emblem of the Evangelist, the eagle on the left and the Holy Spirit on the right. Also of interest is the silver chandelier in the aisle of Theologos with the gilded gospel and chalice and the bronze chandelier of Russian style created in Moscow in 1908. Another treasure kept here is the silver cross with the sacred wood. Anyone interested in learning more about the history and activities of the monastery can consult the Archive and the Cadastral Book of the Monastery. Prevelis’ decline began after 1960 and today it is under-functioning with only one monk.