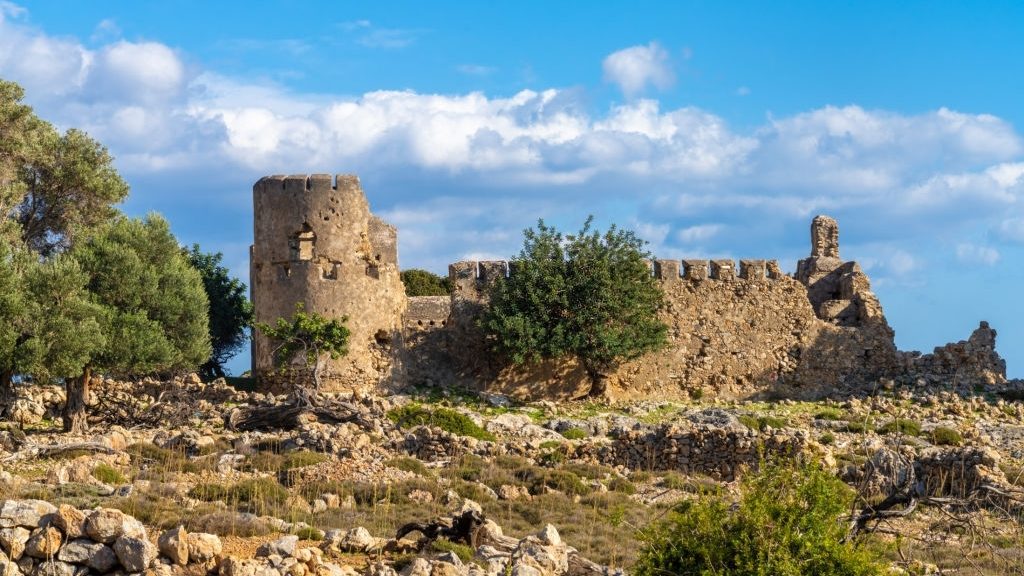 The plateau of Anopolis is just 13 km from Chora Sfakion. A winding road climbs the bare mountains, offering extensive views out towards the little island of Gavdos; it ends in a pine-covered plain. Anopolis was an important settlement; the area and village are named after the ancient city of the same name.

Ancient Anopolis was one of those cities of Crete that were allied to Eumenes II of Pergamum. It thus maintained its independence, minted its own coinage and flourished, chiefly in the Roman and Byzantine periods.

Today there still survive parts of the Cyclopean walls of the old city to the north side of the hill of Aghia Aikaterina. From there one can enjoy the view down below to Loutro, which in antiquity was the port for Anopolis and was called Phoinix. Anopolis was a key centre of resistance in the period of the Venetian rule and likewise during the Turkish Occupation. It paid for its resistance dearly, however, as it was destroyed by the Venetians in 1365 after the suppression of the Revolt of the Kallergoi. When reoccupied under the Turks, it was once again – and utterly – thrown down in the revolt of Daskalogiannis in 1770. Daskalogiannis (Ioannis Vlachos) was a local from an old Vlach naval family and his statue now graces the village square. The 1770 revolt, starting in Sfakia with 1300 men, failed to spark a general uprising as expected. When Daskalogiannis realized that the struggle was doomed, he gave himself up to stop the Turkish massacres. His end was awful; the Turks flayed him alive in Heraklion on 17th June 1771.

To the west of the Anopolis plateau is the striking and deep Aradena gorge, which literally cuts the plain in two. Ancient Aradena (Aradin) was another of the independent cities of Crete, with its own currency. It flourished in the Roman, Byzantine and Venetian times. It too suffered total destruction in the Daskalogiannis revolt of 1770. Today the ruins of the abandoned village survive, on the lip of the gorge, along with the Byzantine church of Michael Archangelos, or Astratigos, patron saint of the Sfakiots.

The church of Michael the Archangel was built between the 13th and 14th centuries AD; it is one of four miracle-working churches in Sfakia, where the process of establishing one’s innocence after being accused was carried out. Shepherds suspected of stealing another’s animals were brought before the chapel to swear an oath to Astratigos as to their innocence of the charge. So important was the ritual and so powerful the wording of the oath that no-one dared to lie. Today the two sides of the gorge are linked by a metal bridge, where bungee jumping is carried out in the summer months – from a height of 138 m. This is the highest bridge in Greece and the second in all of Europe where one can do this particular sport. The Aradena gorge ends at the beach of Marmara by the Libyan Sea.