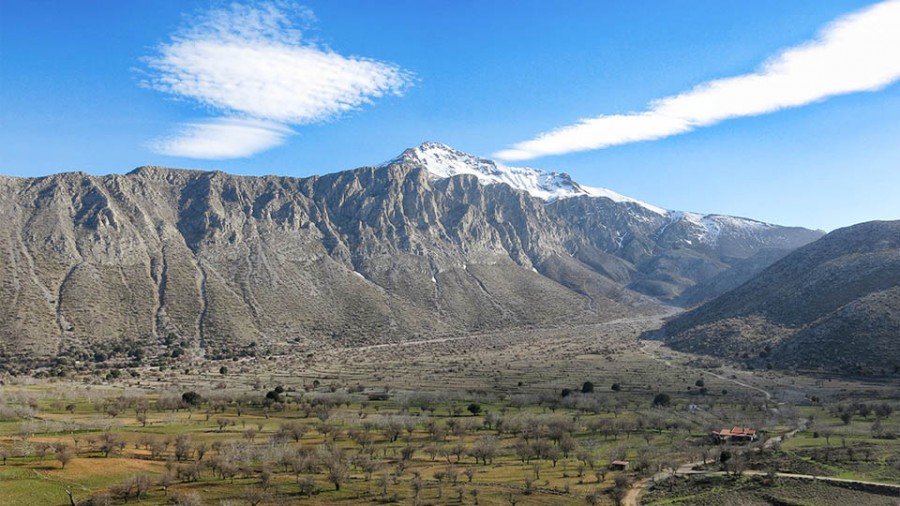 From here, various mountaineering routes begin, towards the Lassithi mountains. The main and most famous routes of Mount Dicti (also known as Lassithiotika Ori) lead to the top of Afentis Christos (2,141 m), Spathi (2,148 m) and Lazarus (2,085 m). Apart from the beautiful landscape, in Limnakaro one can visit the church of the Holy Spirit (B ‘Byzantine period) and admire the special architecture. In recent years, the area is used mainly for grazing, however, it was once famous for its winter pears, walnuts and apples cultivation.

There are various ways to reach the plateau by car, however, the easiest and kindest to your car crosses through Avrakondes. This route will also take you through the cave of Peristera (meaning Pigeons) that has been used since the Middle Minoan period and much later was used to hide rebels. Alternative routes may require a 4×4 car.

In “Anastasi Strovili”, at an altitude of 1400 m, we find a shelter of the Mountaineering and Skiing Association of the Lassithi Plateau, which was completed in 1995. It can accommodate up to 12 people. From there, passing between the two highest peaks of Dikti, one climbs to an altitude of 1650 m and descends to the beautiful pine forest of Selakanos in the Municipality of Ierapetra. The forest lends itself to walks, unlimited in a landscape that alternates between steep slopes, ravines, extensive gorges (that of Selakanos itself is well worth a visit), springs, streams and forest glades. Following the European mountaineering path E4 that crosses the entire area of ​​the plateau, it reaches the highest peak of Dikti, called the “Master” or Afendis Christos. Here is the small church of the Transfiguration of Christ from where the view is impressive.

The Dikti mountain range is a protected ecological zone with vital wild flora and fauna. The path towards the forest of Selakano, one of the most important ecosystems in Crete, offers the chance to explore the stunning scenery of the Cretan mountainscapes. The mountains of Dikti are also one of the locations where the Greek Olympian god, Zeus was thought to have been born.