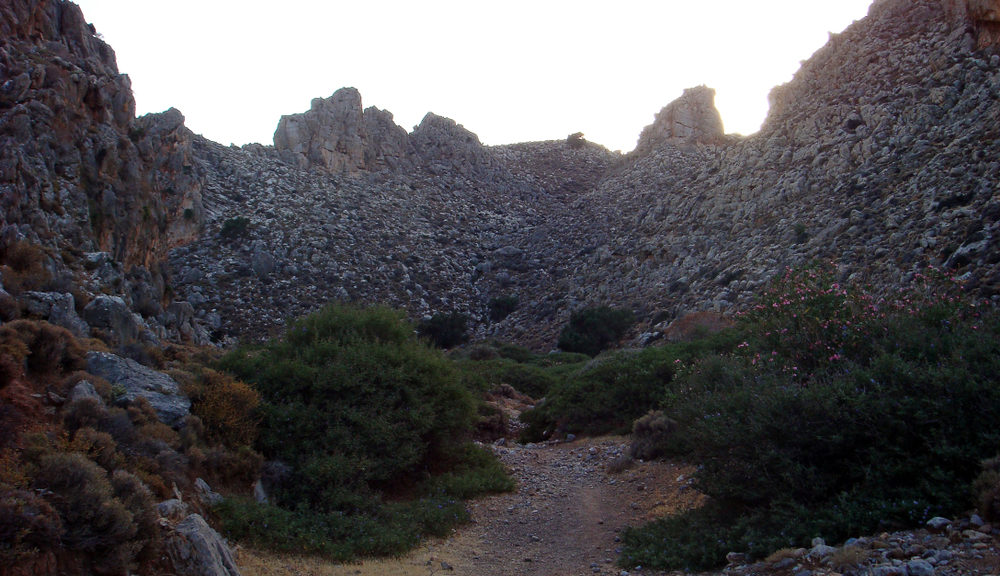 The Karoumes to Hohlakies village route is the last part of the E4 walking path in Crete. Karoumes beach cannot be reached by car and there are two hiking routes available. One is from the gorge starting in Hohlakies and is popular with day hikers. From the other direction, it can also be reached through the coastal path between Kato Zakros and Karoumes beach. The route that starts from the south in Kato Zakros goes through Pelekita Cave – one of the oldest in the island with stalactite and stalagmite formations – and an old Minoan quarry used for the construction of the palace of Zakros.

The eastward facing beach is protected by strong winds with calm and clean waters and small darkish pebbles. It is a symmetrical and impressive bay framed by dense vegetation and during the middle of the day, the rocks provide some natural shade.

From the beach of Karoumes (1), we walk along the stream for approximately 500 m, until the entrance to the gorge. This is smaller than the gorge of Zakros, yet it does not lack natural beauty and interesting geological formations. Bathing in the aroma of wild oregano and thyme, the vertical rocks create cavernous formations and nesting spots for the birds. The path follows the gorge for about 1.500 m, until its western outlet, where we see an information sign, at the end of a dirt road (2). The gorge has water during the winter and early spring months. In the summertime and early autumn months the scenery can be a bit drier.

We next follow the dirt road, along the northern bank of the stream, and after approximately 600 m we pass onto the southern bank and reach a parking area, where a small chapel (3) can be seen. From the chapel, we continue westwards, until the village of Hohlakies (4). For day hikers interested in visiting the beach of Karoumes, it is best to park next to the chapel.

The distance back to the village is approximately 400 m, right where you will come upon the main road that connects Zakros with Palekastro. The village mostly attracts visitors interested in the hike to the beach and is a good place to stop for a refreshing beverage or coffee.

The route takes approximately 1 hour and a half each way. During the summer months, it is relatively easy and suitable for children.