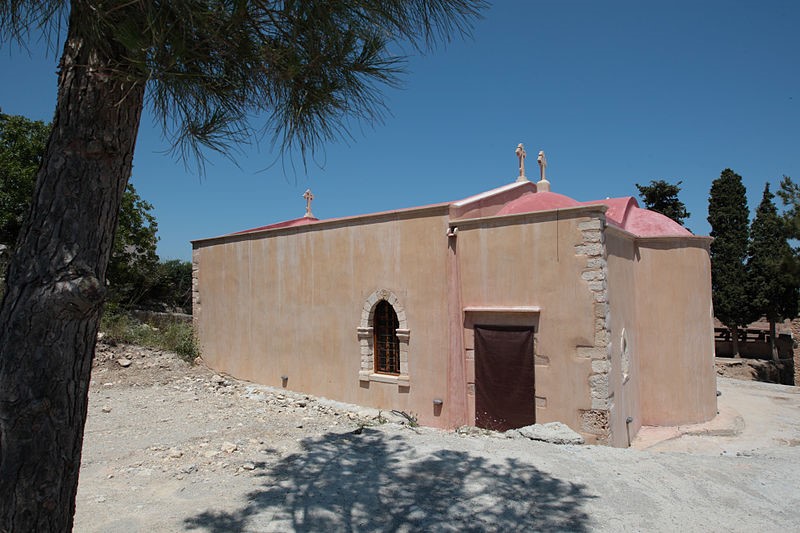 The monastery of Agia Irini is a very old monastery located near Rethymnon. After long periods of devastation and many disasters, today it stands as a classic example of a Christian monument that regained its former glory thanks to systematic restoration work.

The monastery must have been founded by Byzantine ascetics who gathered in the consecrated caves of the area. Various parts of the monastery and the temple are carved into the rock. During the Venetian occupation, this was a wealthy monastery that owned large pieces of land in the area. The name of a slave that must have worked there, survives on a document from 1362. The monastery was active throughout the Ottoman Occupation until the revolution of 1821 when it began to steadily decline.

Nevertheless, it managed to finance schools in Rethymno and at the end of the 19th century, a Theological School also operated here. A long period of desolation followed for the monastery, during which it was in danger of turning into a pile of ruins. At the initiative of the local metropolitan Theodoros, three nuns began the restoration of the site in 1989 with respect for the site and its architecture. In a short period, all the original spaces and areas were restored, even the old Olive Mill and the bordonareio (stable), which changed their use. Thus the monastic tradition returned to the rock of Agia Irini, on which the monastery is located, reminiscent of an old fortress. The restoration work was honored in 1995 with the European Architecture Award EUROPA NOSTRA.

The nuns who live there today are engaged in ecclesiastical handicrafts, they sew sacred vestments with unique artistic patterns. A lot of the icons that you see around the museum were also painted by the nuns. On-site, you will find a small museum with items and books that belonged to the bishop Titos Sylligardakis. Close to the area of Koumbes, we also find the convent of Jesus Christ (Christ the Savior) that was also founded during the Venetian period. The beach of Koumbes marks the section of the city of Rethymno, and is popular but often too crowded.