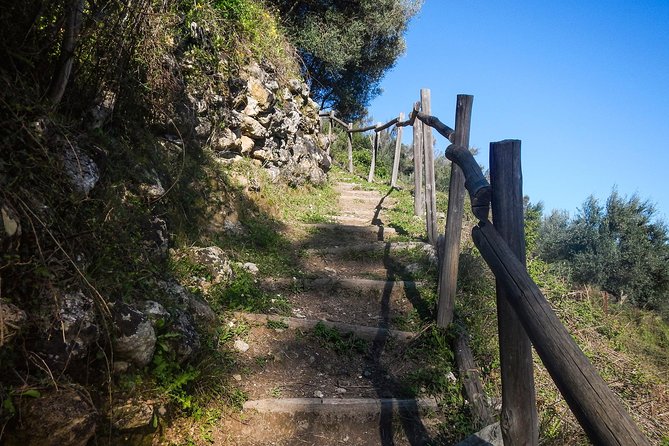 Le village de Prasies également connu sous le nom de Prasses is a traditional settlement only 8 km from the town of Rethymno dans le nord La Crète. Architecturally the village has a number of notable buildings and structures, especially from the Venetian period. There are also more than half a dozen churches in the village, undergoing restoration works, including the church of Saint Anthony. The path crosses through a beautiful gorge to reach the majestic monastère d'Arkadi.

The E4 route from Prasies to Arkadi

De Agia Fotini (1), the rough path goes down a steep slope to a plane forested ravine, which we follow northwards until the entrance to the gorge, where it joins the main stream of Potami (2). We walk along the stream bed going towards the entrance to the gorge, formed by the peaks Kefales et Gaspari. Once there, we cross the stream with the plane trees and the oleanders and begin to climb eastwards on a slope covered by low bushes. After approximately 1.000 m of continuous ascent on the ridge, in a north-easterly direction, we come to a cart track (3) which we follow for about 400 m until the main dirt road (4) (which passes by the rubbish dump of the City of Rethymnon).

We follow the dirt road to the right (south-eastwards) for approximately 500 m; then, we turn into a smaller left branch, on which we continue for 150 m, until the point where it crosses a small ravine with a spring (5) that has drinkable water. Due north of the spring, a path begins that goes eastwards, along the ridge of a hill which is covered by thorny burnet and thyme. We then cross three ridges and after 1.100 m from the spring, we come to the main road (6) which we follow to the right, towards the village of ?arkia (7), where we arrive after 1.200 m.

We pass through the narrow alleys of the village and descend to the chapel of Agia Anna, where we find a drinking fountain. Then, following the dirt road eastwards (ignoring first a right branch and then a left one), for about 400 m, we turn right to an uphill unsurfaced road (8) which after 900 m leads us to an asphalt road (9). We walk in a northerly direction for 1.500 m, until the small village of Kavoussi (10). Then, after 4 km on the main road, we arrive at the historical Monastère d'Arkadi (11).