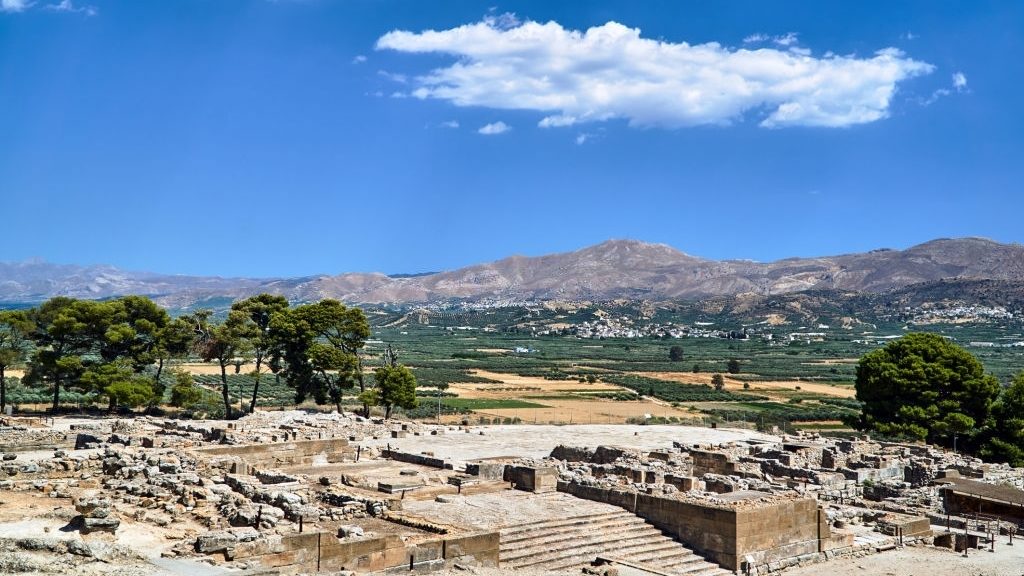 The archaeological site and Minoan Palace of Phaistos (also spelt Festos) is one of the most visited and well known in Crete. The palace complex and the city of Phaistos were built on a hill, offering a panoramic view, especially to the east, north, and to the south. The rich and fertile plain of Messara opens up ahead to the east for a distance of 40 kilometres. In the background, one can see the montagnes de Lassithi. To the right, towards the south, the Asterousia mountains come into view. On the left-hand side, to the north, majestic Montagne Psiloritis dominates the scenery, together with the verdant hills at its foot. An olive grove with centuries-old olive trees lies to the north-west. Geropotamos river (known as Litheos in ancient Greece) zig-zags beneath the trees, and the mer de Libye opens up in the distance.


The view is magnificent all day long, especially in the afternoon; this panorama alone makes Phaistos well worth visiting. Phaistos was the second largest Minoan city and an important administrative centre of south-central Crete. Its influence reached as far as the areas of Amari et Agios Vassilios sur Rethymno, et toute la partie méridionale de l'île. Prefecture of Heraklion. Greek mythology links Phaistos à Rhadamanthus, a brother of Minos, whose dynasty is believed to have ruled the city. According to another story, it was founded by Phaistos, a son of Hercules. Homer mentioned that the city took part in the La guerre de Troie, led by Idomeneus, king of Knossos and the whole of Crète. 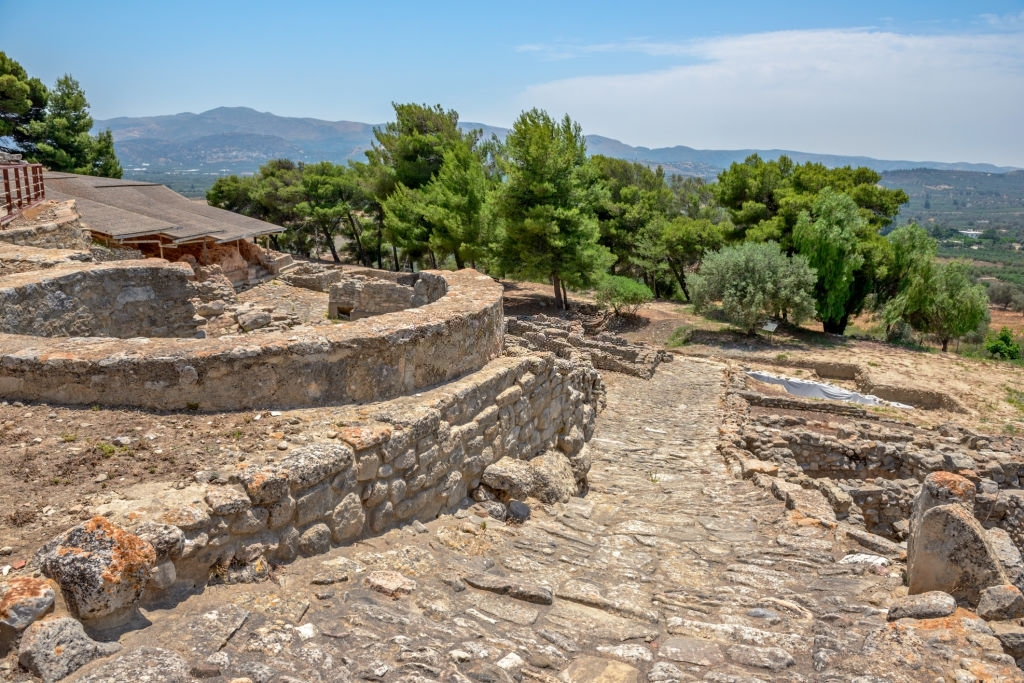 The habitation of the Phaistos site continued from the Neolithic age until the Hellenistic years (3rd century BC), however, the city witnessed its greatest period during the Minoan era. The first palace complex was built circa 1900 BC. Together with the surrounding buildings, it covered 18.000 square metres, an area slightly smaller than that of the palace complex of Knossos. It was destroyed in approximately 1700 BC, only to be reconstructed immediately after, more imposing and luxurious than ever. The restored ruins of this new complex survive today on the site. The Minoan city covered a large area around the palace complex. In the 15th century BC, a new disaster destroyed Phaistos completely; this bleak destiny was shared by all the Neopalatial Minoan centres, throughout Crete.

However, habitation carried on throughout the Mycenaean and the Geometric years, and Phaistos prospered again. Even though it no longer was the administrative centre of the region, a function which was most likely transferred to Agia Triada, the city continued to expand, and become a populous, wealthy and powerful city-state. Its dominance stretched from Cape Lithino à Cape Melissa (in Sachtouria, Rethymno), and it controlled two central, busy ports: Kommos et Matala. In the historical years, a large temple, dedicated to the déesse Rhea, was founded south of the Minoan palace complex. Two of the religious rituals that are believed to have taken place in Phaistos are known to us today. They were organized to honour Zeus Belchanos, Lato (Leto) Phytia, Rhea/the Great Mother, and a celebration known as Ekdysia. Phaistos was in conflict with Gortyna (the other major city-state in south-central Crete) for several years, over supremacy in the area of Messara. Ultimately, in the 2nd century BC, Gortyna conquered and destroyed Phaistos.

*Opening hours are subject to change.