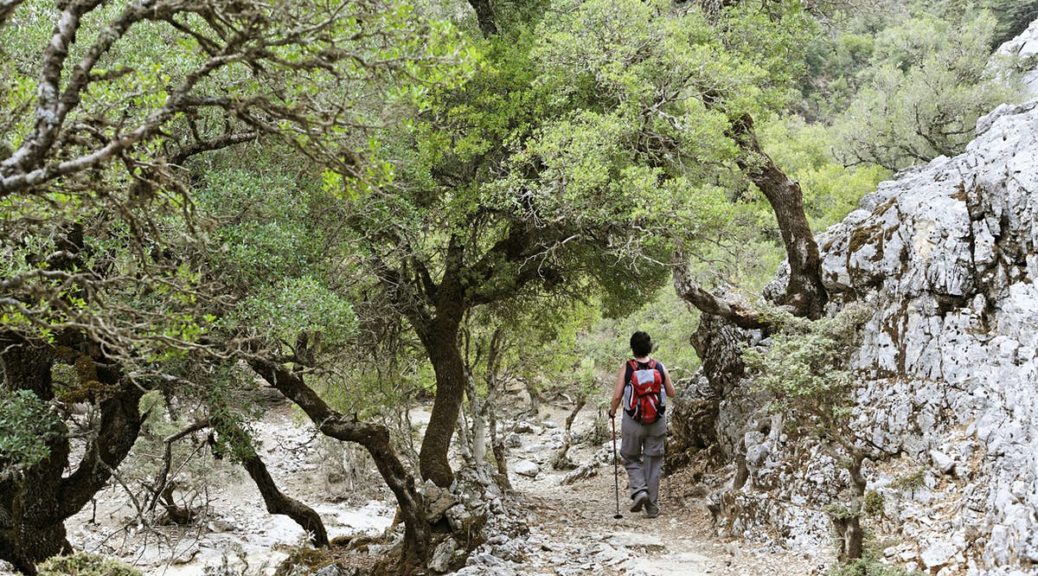 The villages of Zaros and Rouvas are popular with travellers looking to explore the forest of Rouvas and nature enthusiasts. The area offers a lot of interesting hikes, including the short E4 route that crosses through the forest and the monastery of Agios Nikolaos. The trail is well-marked with beautiful scenery through small gorges, valleys and pretty Cretan villages.

The E4 route from Rouvas to Zaros

From Agios Ioannis, we follow the watercourse until its confluence with the main watercourse of Rouvas (1). We then walk along the northern bank, until the entrance to the gorge of Agios Nikolaos, also known as Gafari gorge or Rouvas gorge (2). We cross the watercourse and pass onto the footpath that has been constructed on the eastern bank of the gorge. The path passes through the main part of the gorge, a little higher up than the watercourse level, underneath trees. The landscape is magnificent; this is fairly thought of as one of the most beautiful mountainous areas of Crete.

We next pass onto the western bank. Having reached the area of Kouroupi Prinos, where there is a designated rest area, we resume walking and 35 minutes in total after entering the gorge, we arrive at Kakia Skala.

This used to be the most difficult part of the gorge; however, path construction work has been carried out recently, with a little bridge and wooden walkway, making it a lot easier. We continue walking down the gorge and after a while, we pass onto the eastern bank of the watercourse, among varied vegetation. A little further down the path, we come to a designated rest area, with a drinking fountain. Here, the walls of the gorge are quite imposing.

We continue, passing onto the western side of the gorge. As the footpath moves further and further away from the watercourse, the view of Zaros village opens up ahead of us. We walk along the edge of the cliff until we descend to a dirt road (3). From here, we can follow the dirt road to the Monastery of Agios Nikolaos. Alternatively, we can go northwards (left) for a few metres. At the foot of an imposing, vertical rock, we descend to the watercourse, cross it and come upon a spring with drinking water. Scattered ruins of dry-stone buildings, which used to make up a settlement of woodcutters and charcoal makers, can also be seen in the area.

Should we take the footpath on the left -eastern- side of the gorge, we would cross a large scree area, and then ascend to the hermitage of Agios Efthymios. Down below, on the western bank of the watercourse, the Monastery of Agios Nikolaos can be seen. This is where we ultimately descend by way of the path that zig-zags down the steep slope; 15 minutes after Agios Efthymios, we pass by the chapel of Agios Minas. We continue until we come to an old lime kiln and a small wooden bridge which we cross and then ascend to Agios Nikolaos.

If we don’t wish to go to Agios Efthymios, we can descend from the old settlement to the watercourse, walk along for a while and then follow the path on its western bank; this will lead us to the Monastery of Agios Nikolaos faster (4). From the monastery, we pass onto the eastern bank and follow the path southwards, on a slope covered with shrubs and sage. Climbing for a while and walking along the edge of the slope, the path leads us above a small artificial lake, where the Votomos (5) water spring is located. There is a taverna next to the lake ideal for something to drink or eat. We continue southwards, following the asphalt road; 300 after the lake, on our left side, there is a trout farm and another taverna. A little further down, we come to an old watermill which is still in operation. We continue for another 500 m and then arrive at Zaros village (6).