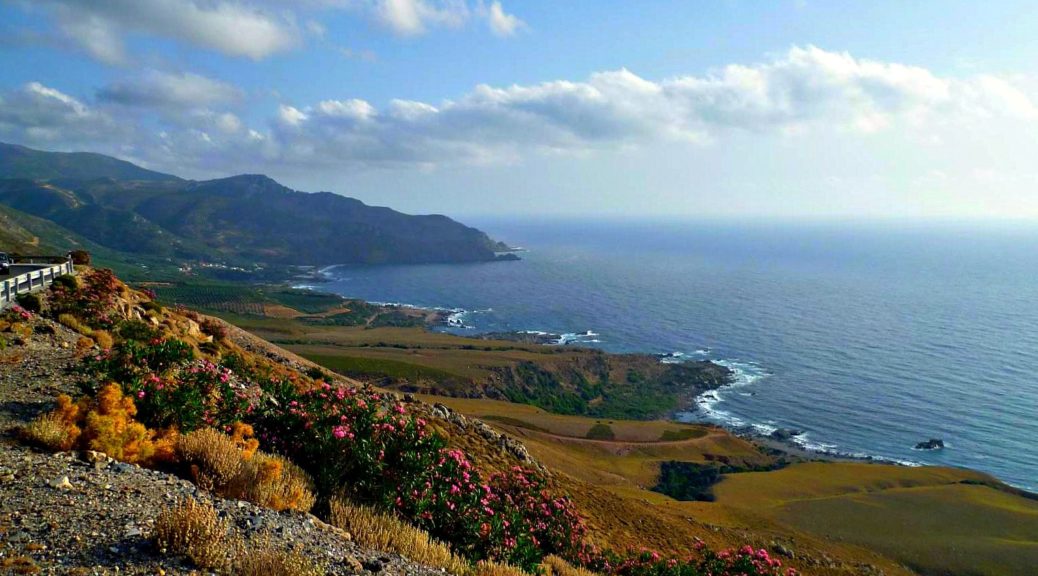 Sfinari is a small fishing village on the west coast of Crete island, in the regional unit of Chania. It is located 56 km from Chania and 18 km from Kissamos. Right by the water, the beach of Sfinari is a quiet bay with a small sandy and pebbly beach and cold refreshing waters. You can also reach the village by bus.

This route will take you south towards Kefali village, which is on the way to Elafonissi beach. There are a few shops with basic amenities and most visitors pick this area for a more traditional and laid back experience.

From Kefali you can keep walking south to the monastery of Chrysoskalitissa. Built high on a rock, and with expansive views of the bay below, the monastery is currently a nunnery and you will need to climb 98 steps to get to the top.

After Sfinari (1), we move away from the sea, still following the paved road. We head southeast towards the mainland, passing through shrub-covered hills. After walking for 2 km, we reach the almost deserted village of Ano Sfinari (2), whose residents built the coastal settlement on the shore of the Sfinari bay. The path then begins to go slightly uphill; after a 6 km walk, we reach Kampos (3), the biggest of a cluster of settlements in the area.

Next, we begin to descend slightly, coming across valleys with plane trees, as well as olive groves, on the hillsides. After walking for 1,5 km from Kampos, we reach the small settlement of Plagia (4). From there, a downhill dirt road begins on our right. Look for the sign that reads: “To Elafonisi” and ignore it. Keep walking for another 4 km until Keramoti (5).

About 3 km further on, we reach Amygdalokefali (6). From Kampos and up to this point, we have a distant view of the sea, to the west. After Amygdalokefali, we lose visual contact with the sea, and, heading east, we move further inland, until the small abandoned village of Simantiriana (7). Then, we pass through Papadiana village (8) and finally we arrive at the village of Kefali (9).