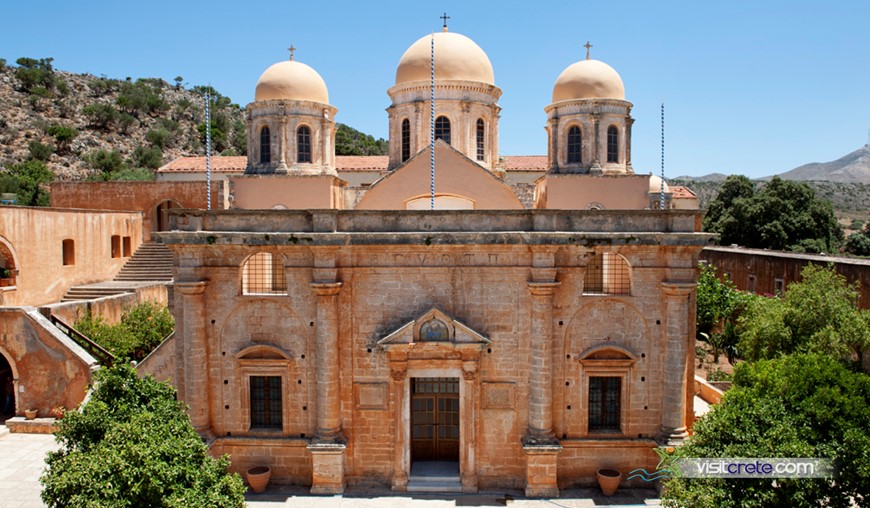 The Monastery of Agia Triada (Tzagarolon) is one of the most impressive monasteries you will see in Crete. It stands out for its façade with Doric style columns, but also the elements of Renaissance architecture. It was built by the Cretan monks Jeremiah and Lawrence by the Venetian Orthodox family of the Tzagarolon in the early 17th century. The museum is housed in three rooms and the exhibits, in addition to icons, a collection of vestments and samples of small crafts, also include objects that survived the looting of 1821. The museum also has a small collection of manuscripts and rare books.

To reach the Monastery, follow signs towards the airport of Chania and the village of Koumares. The distance is less than 15 km. One of the most important exhibits in the museum is the 12th-century cloth covering used for the altar and the icon of St. John the Theologian dating back to the 16th century. A lot of the earlier manuscripts and relics were destroyed after the Greek Revolution of 1821, when the Turks burnt the monastery and the monks were forced to flee.

This is an active and vibrant monastery, that grows and exports their own produce including extra virgin olive oil, honey, vinegar, wine as well as homemade soap. A small shop operates next to the museum. Visitors love the stunning architecture of this historic monastery and exploring the grounds while soaking up the history of the place. It is imperative to dress appropriately and use loose and long scarves to cover, even during the hot summer months.

A beautiful hiking trail that leads to Katholiko beach starts near the Monastery of Tzagarolon, after Gouverneto Monastery. It is ideal for those looking for an easy walk that combines a beautiful setting with some mysticism, owing to the monuments that can be visited along the way. After a hike through the gorge, a beautiful cove, which in the past was used as a harbor by the monks can be seen. Keep in mind that swimming in the cove is not allowed.