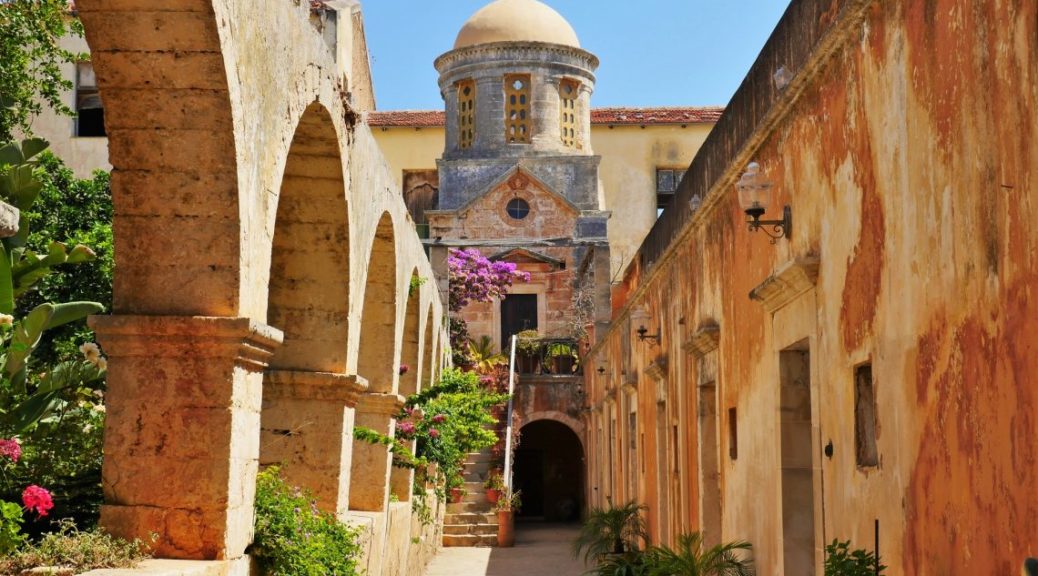 The monastery of Agia Triada Tzagaroli is located in the Akrotiri peninsula of Chania, an area rich in olive groves, vineyards and cypress trees. Architecturally it is one of the most important examples of the Cretan Renaissance. According to tradition, it was founded by the brothers Jeremiah and Lorenzo of the old Venetian family of the Zagaroloi, who were monks in the nearby monastery of Gouverneto. It is said that Jeremiah travelled to Mt. Athos to copy the construction plans for the new monastery.

To reach the Monastery, follow signs towards the airport of Chania and the village of Koumares. The distance is less than 15 km. This is an active and vibrant monastery, that grows and exports their own produce including extra virgin olive oil, honey, vinegar, wine as well as homemade soap. Please respect the dress code and make use of loose and long scarves to cover-up, before entering the grounds.

During the Greek War of Independence of 1821, the Ottomans burnt down the building, which had already been deserted for a few years, and unfortunately, the documents kept in its archives were lost. The monastery was rebuilt starting in 1830. In 1892 the Church School (Ierodidaskaleion), which trained famous priests and teachers, was also erected here and in 1930 it evolved into a seminary (Ieratiki Scholi).

The Holy Trinity (Agia Triada) Monastery is probably the most impressive monastic complex of the final period of Venetian rule on Crete, due to both its scale and architectural form. It combines elements of the Orthodox monastic style with western architectural forms and this reflects the spirit of convergence of the two dogmas on the island of Crete. The fortress-like complex forms a huge rectangle with an impressive Catholicon church in the centre and two small chapels, in the style of Orthodox monasteries. Its prevailing features are austere symmetry and use of classic antiquity forms. The small museum displays relatively few heirlooms rescued from the monastery, mainly icons, vestments, holy utensils, a few manuscripts, incunabula and official documents. One of the most important exhibits in the museum is the 12th-century cloth covering used for the altar and the icon of St. John the Theologian dating back to the 16th century. A lot of the earlier manuscripts and relics were destroyed after the Greek Revolution of 1821 when the Turks burnt the monastery and the monks were forced to flee.

A beautiful hiking trail that leads to Katholiko beach starts near the Monastery of Tzagarolon, after Gouverneto Monastery. It is ideal for those looking for an easy walk that combines a beautiful setting with some mysticism, owing to the monuments that can be visited along the way. After a hike through the gorge, a beautiful cove, which in the past was used as a harbour by the monks can be seen. Keep in mind that swimming in the cove is not allowed.