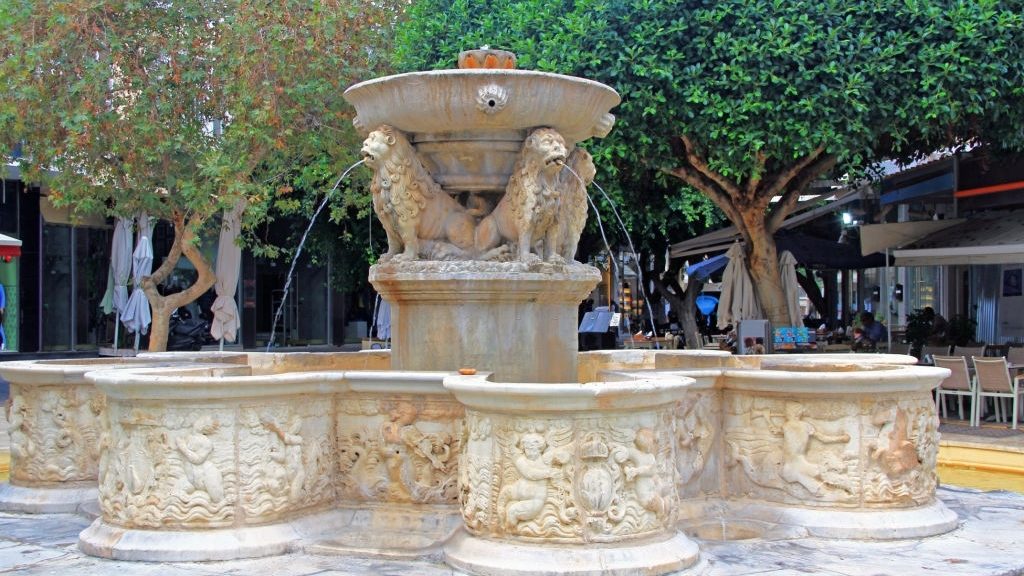 One of the most brilliant monuments of the city of Heraklion is the Fountain of Morosini or the “Lions“, as the residents of Heraklion call it.

This is an impressive sculptural piece which was made in 1628, by then Provveditore Generale (Superintendent) Francesco Morosini and the engineers Zorzi Corner, Raffaello Monnani and Francesco Basilicata. Morosini was also the one who supervised and designed the construction of the aqueduct that led the water from the springs of the Archanioti gorge to the centre of Heraklion. The fountain supplied the city with more than 1,000 barrels of water a day and was named after him. The construction lasted more than 14 months and the fountain was inaugurated on April 25, 1628, on the celebration of Saint Mark, patron saint of Venice. Confusingly, the official name of Lions Square is, “Eleftheriou Venizelou Square” after the Prime Minister of Greece and leading figure in the struggles of Crete for the union with Greece.

It is a central point for the life of locals and tourists in Heraklion, with charming shops, restaurants, cafes, and other popular attractions in walking distance. A large marble basin with a relief face collects water from a fountain which rests on four marble lions. In the centre of the fountain, there used to be a marble statue representing the Olympian god Poseidon with a trident. It was sadly destroyed during the Turkish occupation, possibly because of an earthquake. The relief representations of the basin depict themes from Greek mythology, like dolphins and nymphs and include the coat of arms of the Republic of Venice.

During the period of the Ottoman Occupation, the fountain was remodelled to serve the needs of the population. Marble columns were enacted around the fountain, and holes were drilled to make it easier for people to wash, before entering the mosque to pray. These modifications were removed and the fountain was restored to its original design after the independence of Crete. The Fountain of Morosini is one of the most important monuments in the city of Heraklion together with the churches of Saint Minas, Saint Titos, Saint Catherine, and Saint Peter, the beautiful Venetian architecture of Loggia, the Venetian Walls and the Tomb of Nikos Kazantzakis.