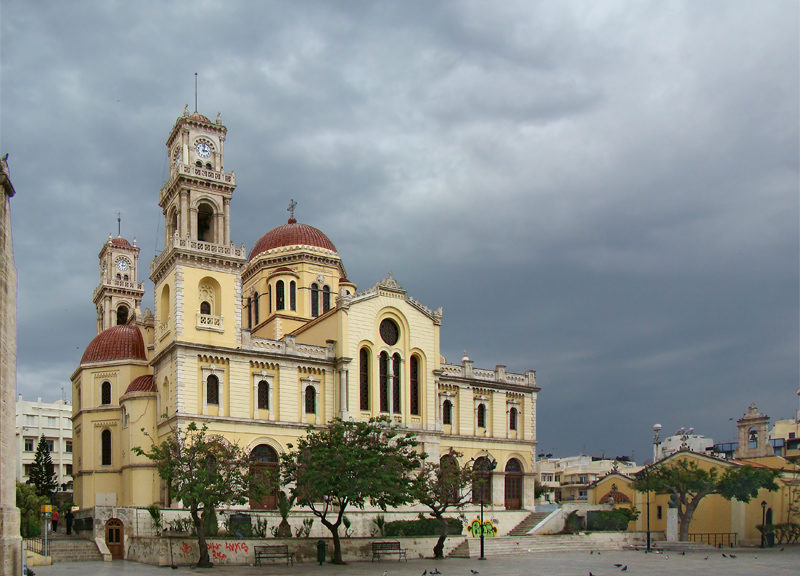 The cathedral of Saint Minas, patron saint of Heraklion since 1734 is located near the centre of the city following Vikela Street and then entering Agiou Mina Street. Near the cathedral, a much smaller and older church known as “Little Saint Minas” can also be seen. On the other side of the square, we find the church of Saint Catherine, and the square that is named after it, full of vibrant cafes, restaurants and shops.

The feast day of Saint Minas is on the 11th of November and is celebrated as a public holiday. The chapel features an iconostasis of exquisite art and icons made by the painter Georgios Castrophylacas.

After a period of successive Cretan revolts against the Turks, the Christian population of Heraklion decided to build a new, magnificent church dedicated to their patron saint. It is said that the saint appeared on Easter Sunday of 1826 after the Muslim population tried to storm the church during the evening service and protected the city. In reality, the Turkish Ayan Agha, intervened at the last moment and convinced the Turks to stand down. The construction work at the Cathedral of Saint Minas, was designed by the self-taught architect Athanassios Moussis who came from Constantinople for that purpose, began in 1862. The work was interrupted during the revolution of 1866-1869 and was finally concluded in 1895. The Cathedral of Saint Minas is one of the most impressive churches in Crete, combining splendid interior decoration with exterior grandeur.

Surprisingly, even though Saint Minas is the patron saint of the city, the name Minas is not common. The reason for this is that during the Turkish Occupation, children born out of wedlock that could not be raised by their parents were left on the steps of the cathedral. The church took the children in and would name them Minas. This is probably why even so many years later, people avoid baptising their children Minas. Other churches in the city of Heraklion that are worth exploring are the church of Agios Titos and the church of Agios Matthaios Sinaites. Outside the town, the church of Michael Profitis Elias is a great example of Byzantine architecture.