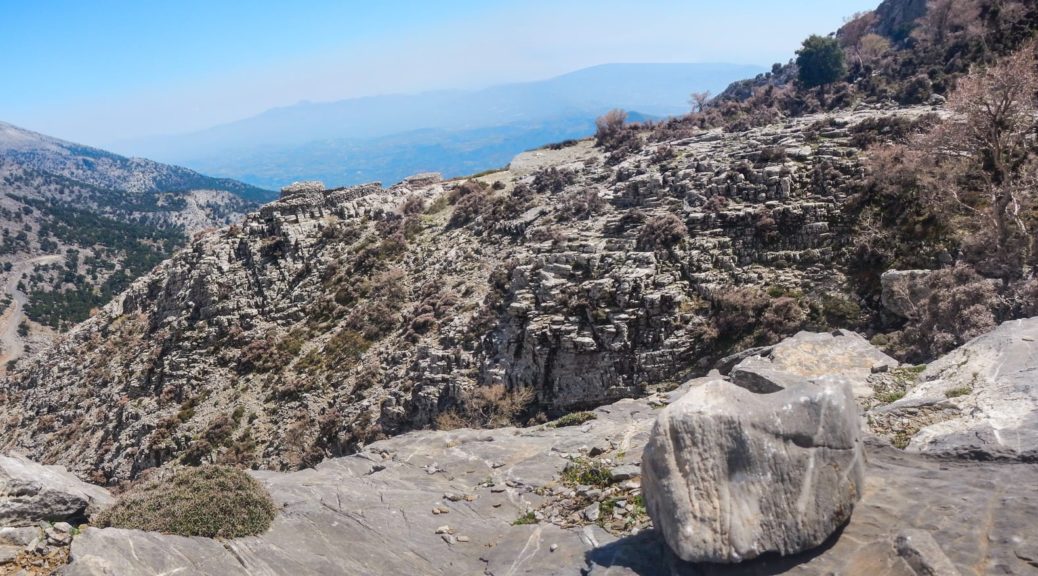 Timios Stavros is the name of the summit of the Psiloritis mountain range on Crete island, and highest on the island. The mountain is also known as “Mount Ida“. From an altitude of 2456 m, the path descends steadily towards the second highest peak, Agathias (2424 m) until it reaches the plateau of Nida. The shortest way to the top starts at the plateau of Laos Mygerou and takes about 2 hours.

The E4 route from Timios Stavros to Nida

To descend to Nίda from the summit of Timios Stavros (1), we follow the mountain line until the saddle (2) of Agathias. Once there, we reach (on our right-hand side, towards the south) the footpath which leads down to the shelter of the Mountaineering Club of Rethymnon. We continue straight on, eastwards, on a slightly uphill path, and reach the northern slope of the peak of Agathias (3). When covered with snow and frost, this section of the route can become very dangerous.

After the north-eastern slope of Agathias peak, we follow a south-easterly direction, passing by a swallow hole. Immediately after, walking in a steady south-easterly direction, we follow the gully of the eastern slope of Agathiàs for approximately 1 hour and 20 minutes, until a small plateau (4). A sign can be seen where the indistinct path splits.

If we take a southerly direction, we come to a bigger plateau, named Akolita, from where we continue towards the Kamares Cave and Kamares village.

For the Plateau of Nida, we follow the left, eastern branch of the path.

We walk through the small plateau and begin to climb slightly towards the small saddle (5) which can be seen ahead of us; we arrive there after approximately 10 minutes. From the mountain line, the rest of the Psiloritis massif, with its lower peaks, opens up eastwards, in the distance. Down below, the Plateau of Nίda can now be seen. We then follow the gully that opens up ahead of us, constantly descending towards the plateau, which little by little appears in its entirety.

After about 1 hour of descent, we leave the gully and go northwards, on a relatively clear path that leads us to a dirt road (6), which we follow to the right. This brings us to the chapel of Analipsi (7). If we follow the unsurfaced road to our left for about 600 m, we arrive at the Ideon Andron, the cave where, according to the myth, Zeus was born. Below the chapel, there is the water spring of Analipsi. From this point, we descend to the Plateau of Nida (8), arriving at the parking area of an abandoned-looking building, which occasionally functions as a taverna.

The descent from the summit of Psilorίtis to the Plateau of Nida takes approximately 3 hours and 20 minutes in total. The ascent, on the other hand, takes 4 hours and 30 minutes, under fair weather conditions.