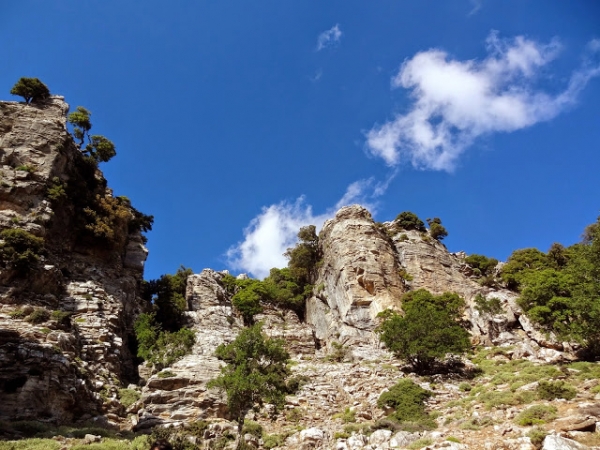 Fourfouras is a small village on the western edge of the Psiloritis mountain range in Crete and belongs to the regional unit of Rethymno. It is the starting location for the E4 trail that ascends to the summit of Mount Ida (another name for Psiloritis).

The E4 trail from Fourfouras to Troumbotos Prinos (Mountain Shelter)

From Fourfouras village (1), we follow the asphalt road for about 150 m, in a southerly direction. At the beginning of an uphill dirt road (2) to our left, an information sign of the Mountaineering Club of Rethymnon (E.O.S) briefly informs us about the route towards the mountain shelter.

We turn right (south-easterly) slightly after the beginning of the unsurfaced road. We pass through thick olive groves on the slope and a small chapel, after which the road splits (3). We follow its left branch for approximately 300 m, until the next crossroads (4). We then continue on its right-hand, uphill branch, among bushes and wild almond trees, for about 500 m, until we reach a drinking fountain (5), at an altitude of approximately 700 m.

Just at the right side of the fountain, a path begins, which we follow in a rather south-easterly direction, between bushes and oaks. A few metres further on we turn towards the north, cross a dry watercourse and begin to ascend, following the marks on the distinct path, which winds up the slope. We reach the top of the slope 20 minutes after the water spring. At this point, low to the right, a huge natural swallow hole, named Vithri (6), can be seen. From here we can also enjoy the view towards the village of Kouroutes.

We follow the mountain line for a while, with Vithri on our right side. Once we are past it, we turn slightly left, walking along the base of a steep slope.

North-east of Vithri, at the foot of a vertical rock up the hill, at an altitude of 1.300 m, the spring of Aplytra (7) is to be found.

We enter the oak zone 10 minutes after Vithri and reach a small gorge formed by a stream. We continue to climb the steep slope, towards the east, through rocky sections. Approximately 1 hour and 15 minutes from the spring, following the path which has relatively frequent markings, we arrive at the top of the slope (8).

There, a fairly even landscape full of oaks, among which the path meanders in an easterly direction, opens up. After another 40 minutes, approximately, we arrive at the Mountain Shelter of E.O.S. Rethymnou (9), at an altitude of 1.500 m. The whole route from Fourfouras takes about 3 hours and 45 minutes. The section of the trail between the water spring (5) and the shelter, is well signposted with E4 trail markings. The yellow and black markings on the rocks are also relatively frequent.