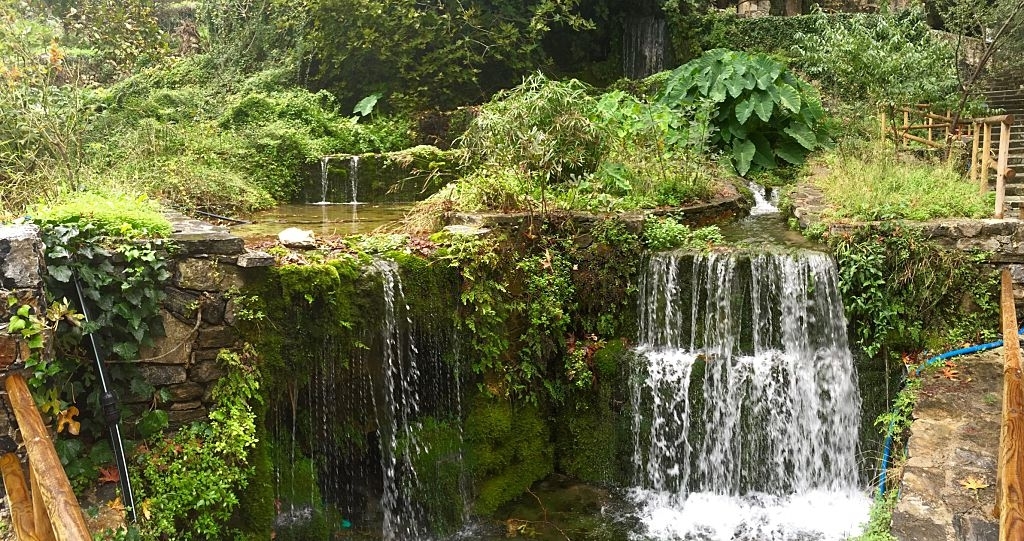 This route starts at the regional unit of Chania in the village of Kallikratis which is part of the southern municipality of Sfakia. The starting point of Kallikratis is a 24 km drive from Sfakia and a 28 km from Georgioupoli to the north. While a long route (approximately 16 km) most of it is on dirt and paved roads. It is all worth it though, to reach Argiroupoli, where the refreshing springs, small waterfalls and plane trees offer a relaxing atmosphere to rest and eat.

The E4 route from Kallikratis to Argiroupoli

From Kallikratis (1), we follow the road in a south-easterly direction, initially passing through a small dry valley. After about 2,5 km we come to a path branching off to the right (2) which leads to the Myriokefala village.

At this point, the western part of the Prefecture of Rethymno can be seen towards the east, in the distance. We follow the left-hand branch of the road which winds on the slope and see a valley surrounded by hills, located south-east of Asi Gonia, below and ahead of us.

Halfway down the slope, we have visual contact with the settlement of Asi Gonia (3), to the north, where we arrive after 6,5 km. From Asi Gonia, we continue to descend for about 3 km, until we are in the valley, next to a ravine with plane trees (4), parallel to which the road meanders.

After 3 km on the western bank, and having passed the small gorge which runs along a watercourse named Koufara, we cross onto the eastern bank. We then climb for 400 m, until we reach a landscape full of enormous plane trees (5). There, the springs of Argiroupoli and the old watermills create a unique setting.

In Argiroupoli, one can find tavernas which serve delicious traditional food. An uphill path begins where the springs and the old water mills are that we follow. After approximately 350 m, having passed through the lower neighbourhood of the village, we arrive at the square of Argiroupoli (6). From this point, we can begin to explore one of the oldest and most beautiful settlements in Crete.