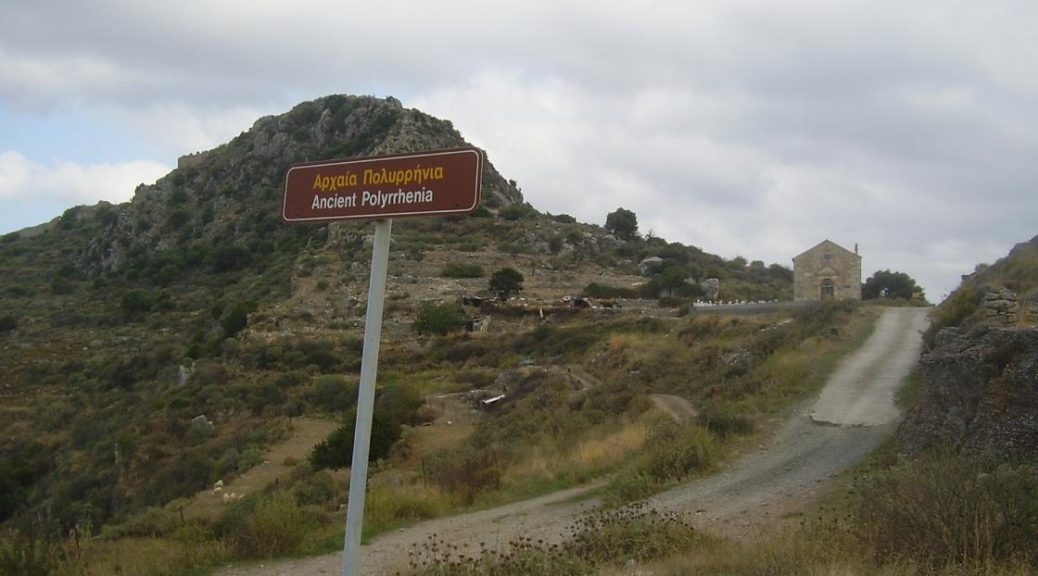 The beginning of the Cretan part of the E4 European long-distance path is at Kasteli Kissamou (1), the westernmost town of Crete, which lies on the shore of the bay of Kissamos. It can be reached by car from Chania or by boat from Cythera and the Peloponnese. The E4 path traverses the whole length of the island, from Kissamos moving south towards Elafonissi and then across the coastline towards Paleochora until it reaches Chora Sfakion. The length of the total route is 500 km and the routes are broken down into manageable day-walk parts but can also be accomplished as multi-day hikes.

You will hear the names “Kissamos” and “Kasteli” used interchangeably to describe the town. These were both ancient sites in the region but Kissamos was added to differentiate from another Kastelli close to Heraklion. Kissamos also attracts visitors for the ferry connection to Balos Lagoon and the island of Gramvousa on the northwestern tip of the island.

The first stop, Polyrrinia, is the site of an ancient settlement, where excavations are ongoing. The ruins that are still visible today date from the Byzantine and Venetian period but the area was occupied much earlier. If you follow the signs towards “Ancient Polyrrhenia Acropolis”, you will be rewarded with views of rolling hills and views of the bay from above.

The E4 route from Kastelli Kissamou to Polyrrinia

Walking down the main street of the town, 300 m east of Eleftherios Venizelos square (where the monument of the actor Manos Katrakis, who descended from Kasteli, is located) we find a smaller square. This is where a paved road begins that will lead us south to Polyrrinia.

The slightly uphill paved road goes along a hilly landscape covered by olive trees. About 2 km after crossing the small village of Kato Palekastro (2) we see a distinctive peak, on the south side of which ancient Polyrrίnia was built. We pass the small settlement of Korfiana and continue for another 1,7 km to the village of Gregoriana. The last stretch towards Polyrrinia is about 1,2 km. From here we can continue towards the beach of Sfinari for a refreshing swim and a bite to eat.