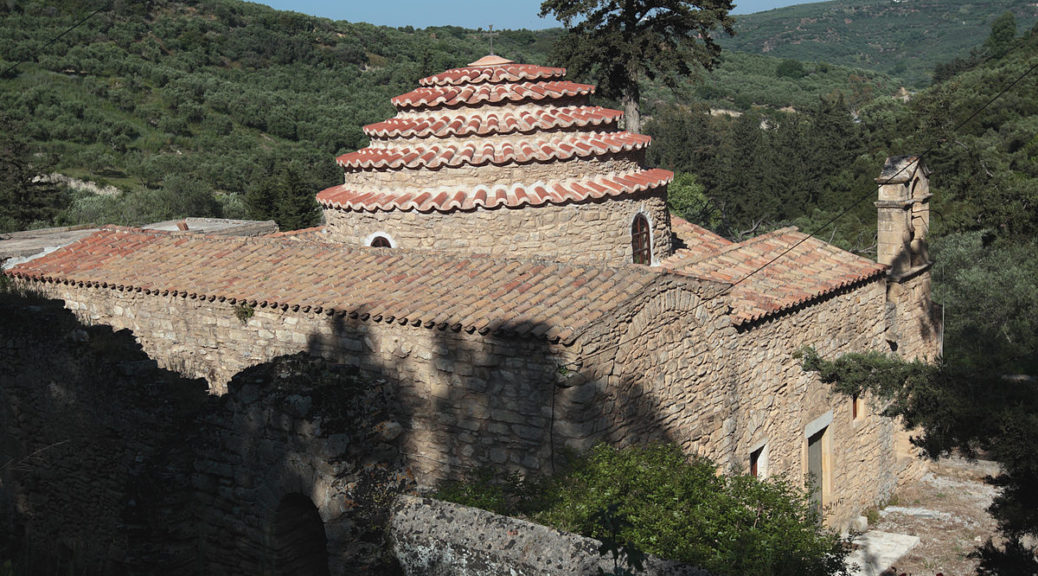 The Rotunda of Episkopi is a remarkable Early Byzantine church, dedicated to the Archangel Michael, that can be seen near the village of Kato Episkopi, in the area of Kissamos. In the early Christian years, it was the seat of the Bishop of Kissamos. In the 6th century AD, the church took the form it has today, and it has been in use continuously since then.

Its architecture is impressive and unique in the whole of Crete featuring five concentric rings in the dome, a rare sight in Byzantine architecture. It has a narthex with a large dome and surrounding rooms. A stone baptismal font is to be found in one of these spaces, where worshipers of the Early Christian years were christened. Major works of art of exquisite craftsmanship from this period survive today in the church, such as the mosaic floors that represent geometrical patterns, as well as a unique sample of paintings of the Early Byzantine period.

The church walls were repainted at least five times in the subsequent centuries; the 12th-century frescoes stand out amongst them, featuring excellent representations of the Virgin Mary of Blachernae (Panagia Vlacherniotissa), the Archangel Michael, other saints, as well as various scenes from the Gospels. The style of these frescoes is related to that known from the artists from Constantinople. The Rotonda is often closed for renovation work, but during the summer months, you may find it open during the morning hours from Monday to Friday. Otherwise, it is best to visit during one of the celebration days; the 1st Sunday of August; the name day of Archangel Michael (November 7th); the name day of Melchizedek (December 14th).

On the way to the Rotunda, there are various other popular attractions to see, like the “Ancient Olive Tree”, considered one of the oldest in the world and dated between 2000 and 4000 years old. What is remarkable about the tree is that it still produces fruits. A shop operates nearby where you can try the olive oil and other local products. It has been a protected natural monument since 1997 and its branches were used to make the wreaths of the victors during the 2004 Athens Olympics.