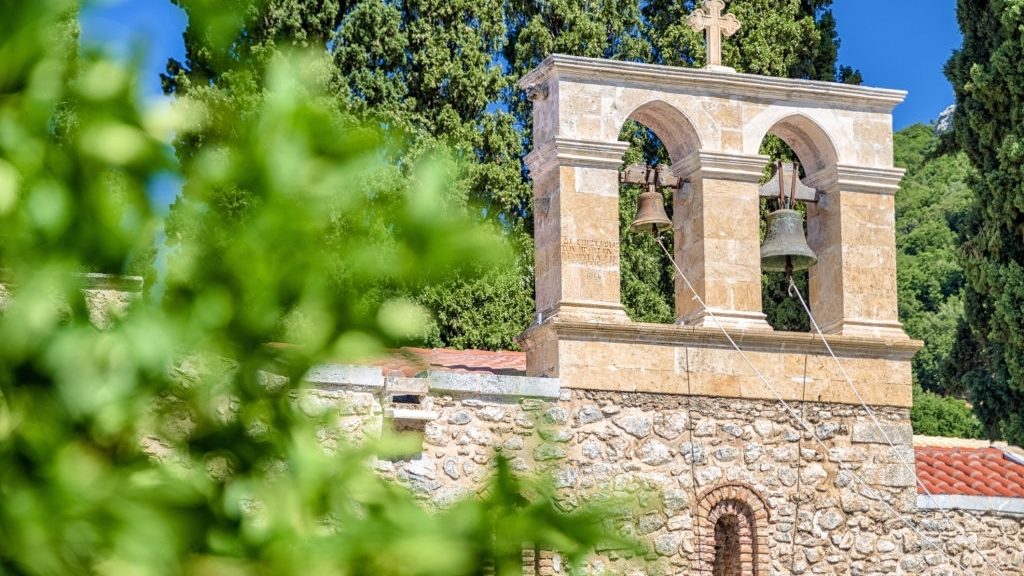 The monastery of Kera Kardiotissa is located on the mountain range of Dikti and can be found following the uphill road to the Lassithi Plateau. It is 50 km from Heraklion and is dedicated to the Virgin Mary, like most Cretan monasteries.

The monastery is associated with a legend that is in itself a pole of attraction for many believers. According to tradition, the icon of Panagia Kardiotissa – from which the monastery took its name and is considered miraculous – was stolen three times by the Turks and returned “by itself” three times. The third time the icon was chained to a marble pillar, which was also taken with when it left. The pillar that is mentioned in the legend is found today in the precinct of the monastery and the chain is placed next to the image.

This is a very old monastery but we do not know exactly when and by whom it was founded. It is first mentioned by the Florentine monk Christopher Buodelmodi, in 1415. In its original form, it was established as a fortress. Its location on one of the natural passages leading to the Lassithi Plateau – which was a centre of revolutionaries – required its fortification. The monastery wall surrounded and protected the temple, the monks’ cells and the communal buildings. However, its old form was altered due to the destruction and fires it suffered during the Turkish occupation. Today, not much remains of the old fortifications, apart from the entrance on the east side of the complex and the basic layout of the monastery buildings.

The Katholikon of the monastery has a significant mural that is a feature of artistic creation dating back to the 14th century.

After the conquest of Crete by the Turks, the monastery played an important role and was a refuge for the revolutionaries, as were most monasteries on the island. For its role, it suffered grave consequences and after the outbreak of the Revolution of 1821, it was repeatedly set on fire by the Turks. During the 20th century it faced the danger of desolation, due to a reduction in the number of monks, but thanks to its conversion into a nunnery, it is now still active.