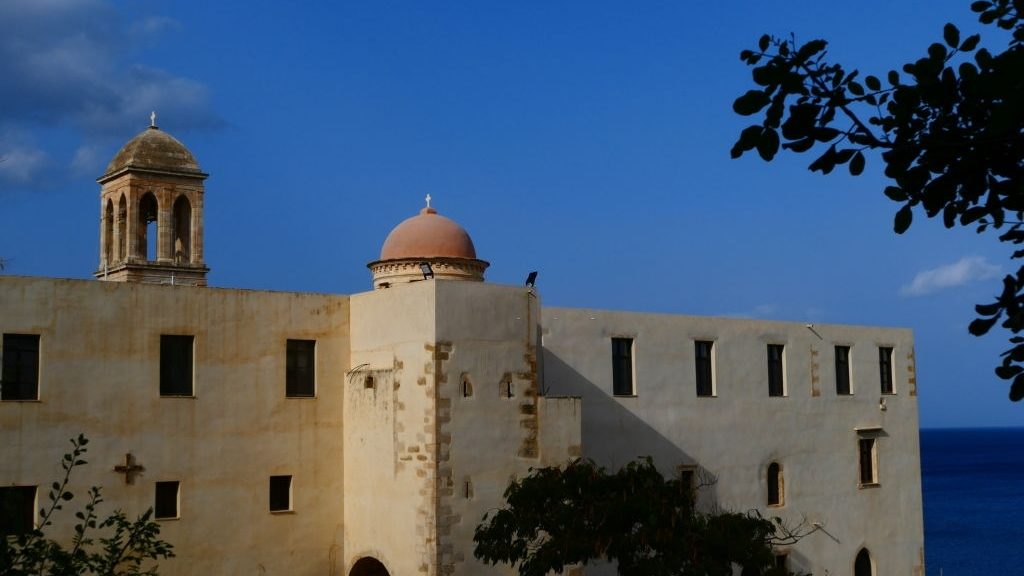 The monastery of Gonia Odigitria is situated near the village of Kolymbari and is one of the best-preserved monasteries on Crete. From the outside, it looks like a fort and has a three apse Catholicon church and two chapels. The initial donor (ktetor) was Brother Vlassios, a monk from Cyprus, who, according to tradition, started building the monastery on this site after it was revealed to him by Mother Mary. This is why the monastery, that was built between 1618 and 1637, is dedicated to Mother Mary Hodegetria (meaning she who shows the way).

The monastery has been an important centre for monks and hermits and flourished in the last decades of Venetian rule. It was conquered by the Ottomans in 1645 but had the good fortune of being under the administration of men like Isaias Diakopoulos, who not only preserved its fortune but introduced the teaching of Letters and Arts at its premises and preserved its character. Before the Ottoman Occupation and the subsequent looting, the monks had arranged to send 40 valuable holy icons from the monastery to other Greek territories; these were returned after the Liberation Revolution. Unfortunately, the looting continued after 1866, so some of the artwork was never recovered.

Still, even today, in the small museum of the monastery one can admire the wealth of its icons and manuscripts. Pride of place is given to the icons of the Crucifixion, of St. Nicholas (1637), the multi-faced icon of the Story of Joseph of the Nile (1642), two more icons of St. Nicolas (15th and 17th century), of the Transfiguration (15th century), of Mother Mary of Mercy (Eleousa) (15th century), and Christ the Prelate (15th century). The museum also has two old Monastic Codes with rich content about its history, as well as other manuscripts and sacred utensils.