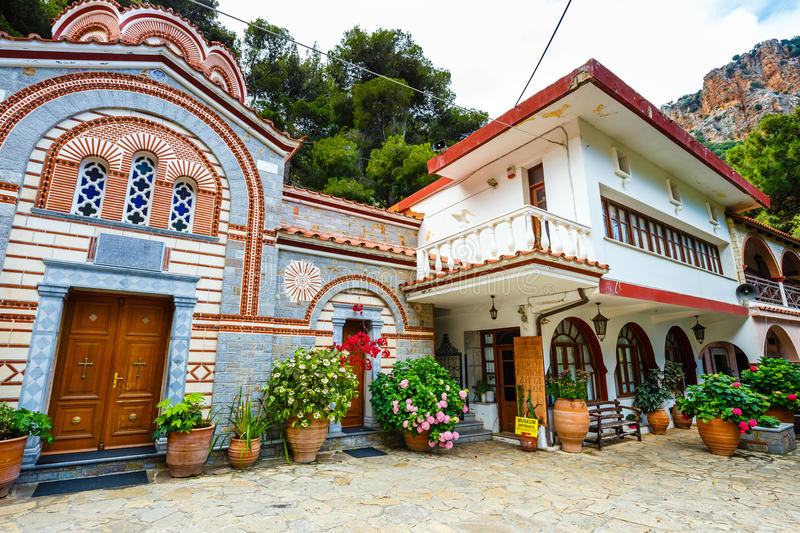 The Monastery of Agios Georgios, located in the gorge of Selinari, was built during the second Byzantine period. In the area, there is the katholikon which is dedicated to Agios Georgios as well as two other temples dedicated to the Epiphany and the Resurrection. It is located between Heraklion and Agios Nikolaos looking over the Bay of Malia.

The monastery was built during the Second Byzantine period, between 961 – 1204. It was destroyed in 1538 by pirates. According to tradition, a monk from Rhodes found an icon of Agios Georgios on the spot and decided to build a small church. He spent the rest of his life in a rock he carved at the top of Anavlochos, on the east side of the gorge, where a large cross has been placed. It is possible to visit the cave through a hiking trail. The icon of St. George is considered miraculous as it is said that during the Turkish occupation he protected the monks. Three bullet holes can be seen, stuck in the image. It is a male monastery and one of the most famous in Crete. Agios Georgios is considered the protector of travellers, and visitors will often stop here to pay their respects before continuing east.

Another popular attraction in the area is the Minoan Palace of Malia; it is the third-largest Minoan palace complex. Inhabitation of the area seemingly began in the Neolithic age and continued in the Minoan era. A large settlement had already flourished there in the Prepalatial period (2500-2000 BC). You may also wish to travel south towards the Lassithi Plateau and explore the villages and mountainous landscape of the area. Framed by the stunning Dikti Mountains, this is the largest plateau in Crete and where the Diktaion Antron, the cave where Zeus was born according to some accounts is located. The highest peak is Spathi with an altitude of 2148 m. Moreover, the E4 European Walking Trail descends from Lassithi and there are various routes and hiking trails for nature lovers. The Dikti mountain range is a protected ecological zone with vital wild flora and fauna.