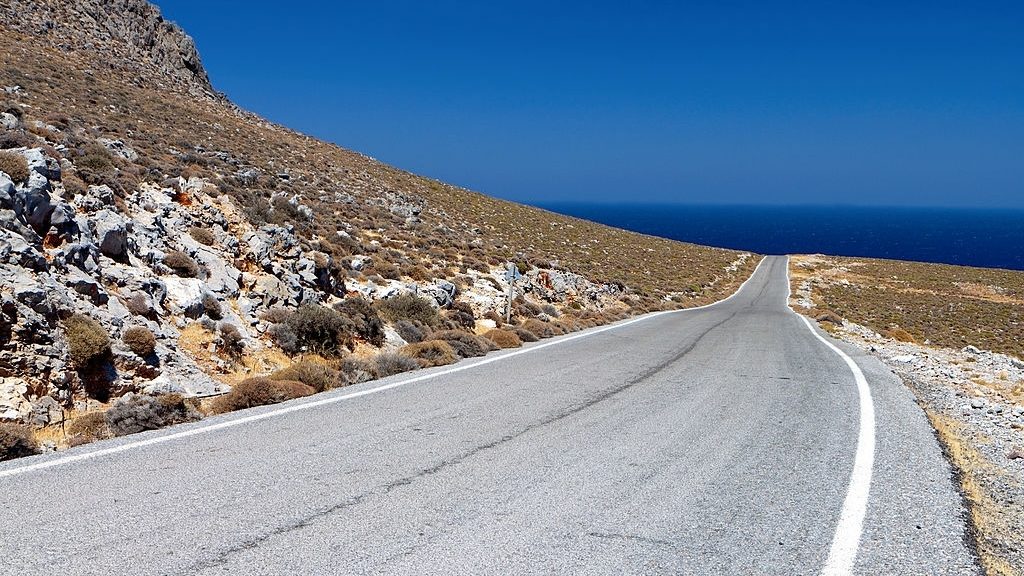 The path from Zakros to Kato Zakros, brings the E4 route to the coast of eastern Crete. Following the signs, we pass through the old, upper area of the village of Zakros (1) and soon reach the central square, and immediately after the village church courtyard. Zakros has a Natural History Museum and a Water Museum but you need to check ahead for opening hours if you want to visit them.

The first part of the route follows the narrow cement road eastwards; it goes downhill through a sparsely-built area and crosses a small bridge over a streamlet. We continue straight on the dirt road, which goes along the western bank of a watercourse, until the first turn-off on our left, which we follow. A small valley with farmhouses is on our left-hand side.

A little further beyond that, there is a turn-off on our left that we ignore; we continue until we come to a small farmhouse on our left. We descend for a few metres and then turn left again. Next, we will pass by a threshing floor and begin to descend towards the watercourse (2). We initially walk on the right-hand (southern) bank of the watercourse; however, after a few metres, we pass onto its left bank, and continue until we reach the main section of the gorge a little further down, and walk along its bed.

Having left two successive branches of the gorge behind us, on our left, we come to the point where the shorter branch (3) of the route ends. This brings us to a parking area next to the road which connects Zakros to Kato Zakros.

We next follow almost continuously, the course of the cement water conduit which runs throughout the gorge, channelling irrigation water to Kato Zakros.

After walking for 50 minutes in the gorge, which is full of oleanders and plane trees, we reach an area of caves once used as a burial site in the Minoan era (4). The aptly named Valley of the Dead, with panoramic views of the area below is one of the highlights of this route.

A few minutes later, we reach the outlet of the gorge. Once there, we follow the dirt road to the left, walk south of the Minoan palace and end up at the small, current coastal settlement of Kato Zakros (5). The Minoan Palace of Zakros was one of the smallest settlements when compared to the Palace of Knossos, but has offered valuable and beautiful exhibits. They are on display at the Archaeological Museum in Heraklion.