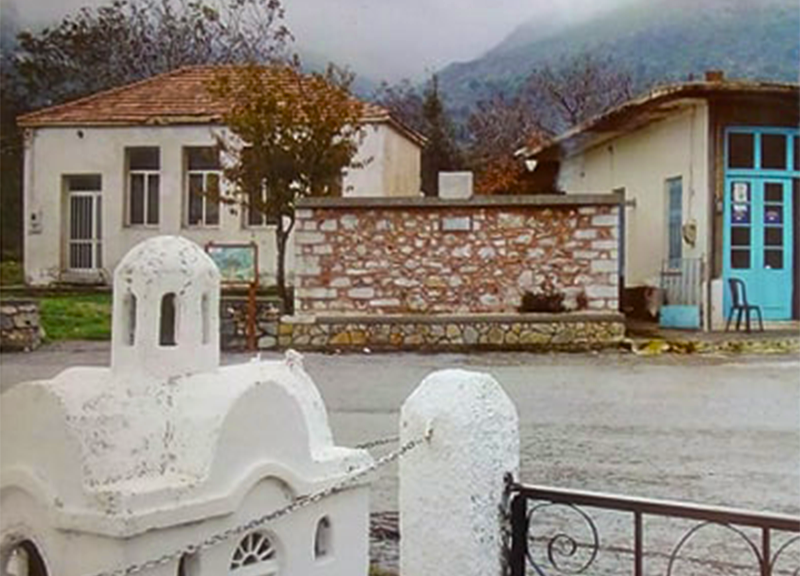 The village of Kastamonitsa, only 40 km from Heraklion in the north, is the starting point for this short E4 route, that ends at Kato Metochi. Its strategic position by the entrance of Lassithi Plateau made this a common battlefield area, especially during the Ottoman Occupation. From Kato Metochi hikers can carry on to the village of Agios Georgios and explore the Dikti mountain range.

The E4 route from Kastamonitsa to Kato Metochi

From the north-eastern exit of Kastamonitsa (1) and on, the road goes along the foot of the western side of Mount Dikti, in a north-easterly direction. Here, 350 m after the last houses of the village we come to a church and two side roads on the left (2) which we ignore and continue straight on, to the right. We ignore a branch road (3) going uphill to the right that we meet 250 m further on, and continue straight, in a descending path. After 1.000 m, we come to a left branch road and a spring, with drinking water (4).

We continue straight for 800 m and then turn somewhat eastwards, into a hollow of the slope with a watercourse; on its northern bank we find the chapel of Agios Georgios. Due north of the place where the road crosses the watercourse (5) an old footpath begins; it initially goes along the foot of the slope, parallel to the road, through dense bush. After approximately 600 m (6), we ascend eastwards for 2,5 km, along the old, winding, stone-paved path, to the top of the slope, where we reach a dirt road (7).

This part of the route, on the uphill cobbled path, which offers a magnificent view to the northern region of the Prefecture of Heraklion, as well as to the Cretan Sea, takes about 50 minutes in total. At certain spots, there is also the possibility to leave the path and take one of the designated shortcuts that can be found in the area.

In the past, this cobbled footpath served as the main access route to the Lassithi Plateau, coming from the western side of Mount Dikti.

The unsurfaced road where the uphill stone path leads us, meets the main dirt road after a few metres towards the north; we follow this to the left (eastwards). At the junction of the two tracks, we can see part of the Lassithi Plateau, with its characteristic windmills, towards the east, in the distance.We then begin to descend, passing through slopes above a small valley, until we reach the peripheral asphalt road (8) in the area of Honos, where all the surface waters of the plateau end up.

Should we continue straight towards the east, after 700 m we would arrive at the small Monastery of Vidiani. It is stone-built with beautiful stone carved windows and a flower garden. There is also a small natural history museum on the grounds. As we continue, we next turn right at a bridge, and following the road southwards for 1,5 km, we arrive at Kato Metochi (9), the westernmost village of the plateau.