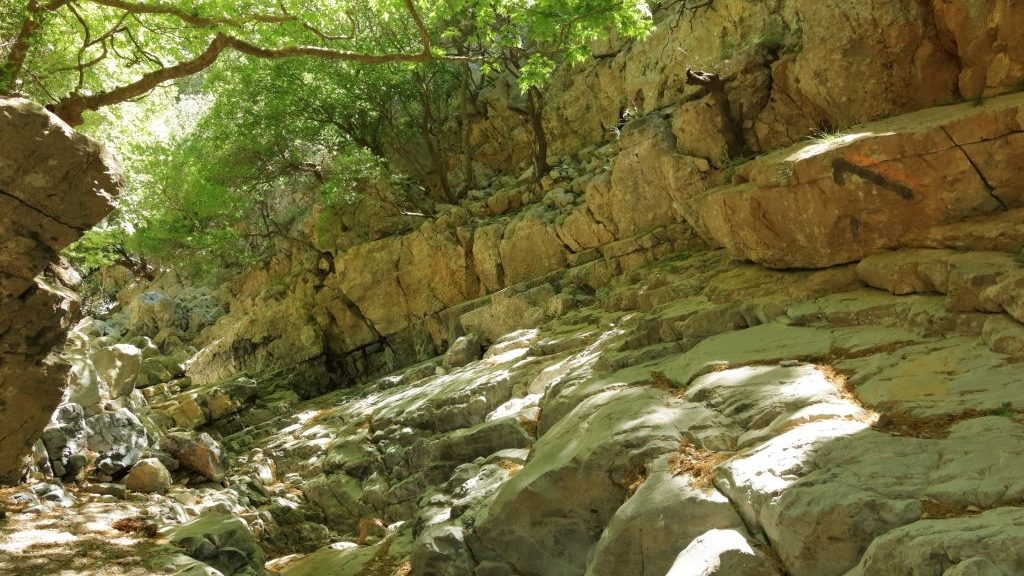 Argiroupoli stands at the very border of the regional unit of Rethymno and is a popular destination for visitors to the island. Previously known as Lappa from the ancient city that stood there, the village is full of traces of modern and ancient civilizations, and is a traditional settlement. The springs of Argiroupoli and the small waterfalls complete this idyllic scene where visitors come to enjoy a meal and the natural landscape. The hike towards the village of Moundros is relatively easy and can be accomplished as a day hike.

From the centre of Argiroupoli (1), we follow the main road eastwards until a point between the courtyard of the High School and a small church (2), where there is an old path which goes down through an olive grove. After approximately 150 m, the path crosses the asphalt road and continues to descend parallel to a watercourse.

In this section of the path, traces of ancient rock-hewn tombs are frequently seen. We pass next to the chapel of the Five Virgin Saints (ton Pente Agion Parthenon) (3) and then we come upon the watercourse and an old drinking fountain. We cross the watercourse exactly where the fountain is. There, the old, abandoned path disappears among myrtles and carob trees. Following the difficult to discern footpath, as well as the marks which are few and far between, we continue for about 800 m, going uphill, until we come to a cart track, a farmhouse built with bricks and a vineyard, on our right-hand side.

We walk between dry-stone walls and after 300 m we reach the asphalt road, which we follow until the village of Kato Poros (4). Passing through the old part of the village, we reach a small square; we then turn right, following the marks that lead us to the southern exit of the village, where there is a fountain with drinking water. From the exit of the village, we follow the old path, which after a while meanders down the slope for approximately a 15-minute walk. Then, we come to a dirt road, which we follow for a little while towards the south. Next, we descend to the western bank of the watercourse, following the markings.

From this point, a dirt road leads us to the main road (6), which we follow eastwards for about 1,8 km. We then arrive at the bridge (7), found just before the village of Velonado. Just before the bridge, an unsurfaced road begins, at a spot with tall plane trees; it goes northwards, parallel to the watercourse, for approximately 100 m. At this point, we leave the dirt road and enter the watercourse bed which runs along the Moundriano gorge.

We walk through the gorge for about 3 km, until the valley of Moundros opens up ahead of us. Here, we leave the watercourse bed and begin to climb slightly, on the old, distinct path (8), on the eastern slope of the gorge. After 800 m we arrive at the traditional settlement of Moundros (9).