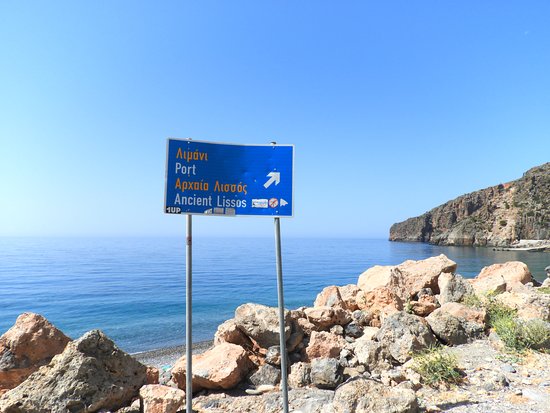 Sougia, located 70 km from Chania, is a small coastal village on the southern coast of Crete island. The island has been relatively unaffected by mass tourism, despite the influx of visitors that are primarily drawn by the nearby Samaria gorge hike. In the past, Sougia was an alternative and hippie holiday destination, and a lot of that laid back charm has remained, even if the nudist beaches have moved further away from the main centre. You can reach Sougia by car from Chania as well as a few infrequent bus routes. You can also reach Sougia on foot from the north, through Omalos and Agia Irini gorge. Another option is to walk from Palaiochora on the west coast. Both of these routes are part of the E4 hiking trail.

The beach of Lissos is also accessible by car, either from Sougia (30 km) or Palaiochora (20 km). The waters of this protected bay are a striking turquoise colour, with small pebbles and rock formations enveloping the bay. The beach is named after the ancient city of Lissos that stood here. From findings, we know it was a wealthy and prosperous city that served as one of the harbours of Elyros and minted its own coins. Most of the findings are exhibited at Archaeological Museums of Chania and Heraklion.

An alternative option for those that only wish to do this route once, is a short 20-min ferry ride from Sougia that departs frequently during the summer months.

From the beach of Lissos (1), we begin to ascend for about 500 m, passing through hillside terraces, until the top of the eastern slope (2). We then follow the trail on the rocky and bush-covered plateau and after 800 m we descend deep into the gorge of Lissos (3). We follow the gorge for 1 km, until the exit point, where the small harbour of Sougia (4) is located.

Despite the small size of the gorge of Lissas (in height and length), the dense oleanders and the steep rocky slopes add a special beauty to the route through the gorge.

Once we exit the gorge, we follow the coastal road for 500 m, to the settlement of Sougia (5).