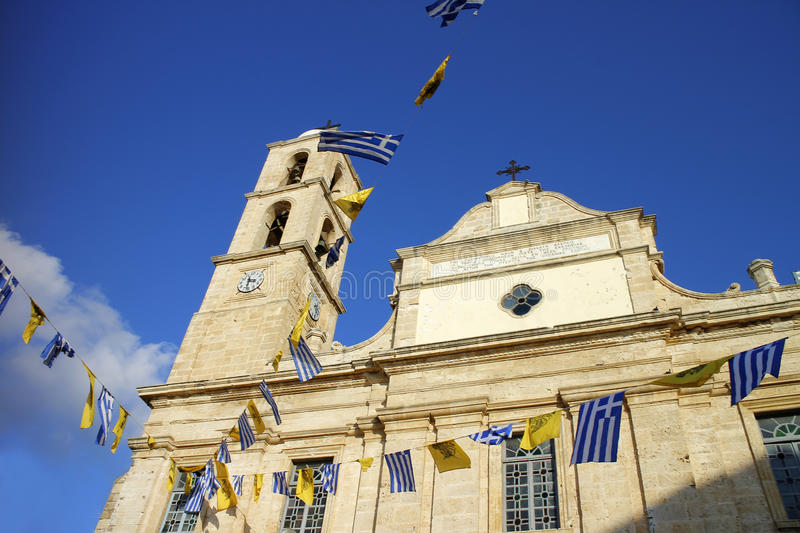 The Cathedral of the Presentation of Virgin Mary also known as Panagia Trimartiri is considered the protector of the city of Chania. The central aisle is dedicated to the Presentation of the Virgin Mary (Isodia tis Theotokou), which is celebrated on November 21. The northern aisle is dedicated to St. Nicholas (Agios Nikolaos) and the southern aisle to the Three Cappadocian Fathers (Tris Ierarhes).

The church is built on the site of an earlier church, which had reportedly existed here since the 14th century. Later, with the conquest of the city by the Ottomans, in 1645, the church was turned into a soap factory, however, there were no alterations in the exterior and layout of the building. From there on, its history has been intertwined with local legends. After the soap factory went bankrupt, the Mustafa Pasha, who was the Prime Minister at the time, ceded the building to the Christian community of the city and requested for the reconstruction of the temple.

Legend has it that Mustafa Pasha made this decision when his child fell into a well nearby and was saved with the help of the Virgin Mary. Despite the tensions between the Muslim and Christian communities, the restoration of the church went ahead without any issues. The construction of the church was completed in 1860, resulting in the building that we see today, a three-aisled basilica with an elevated middle aisle and numerous architectural elements of Venetian influence, such as carved square columns and cornices. Only then, the icon of the Presentation of the Virgin Mary, which had been taken away by the last worker of the soap factory, was restored to its rightful place within the church. The history of the church of Panagia Trimartiri church is intertwined with the history of the city itself. It was frequently used as a place of refuge and it suffered extensive damages during the Cretan revolt of 1897. Its renovation was undertaken by the Czar of Russia, and the bell tower was also built thanks to his donation. Trimartiri also suffered a lot of damage during the bombing of Chania in May 1941.