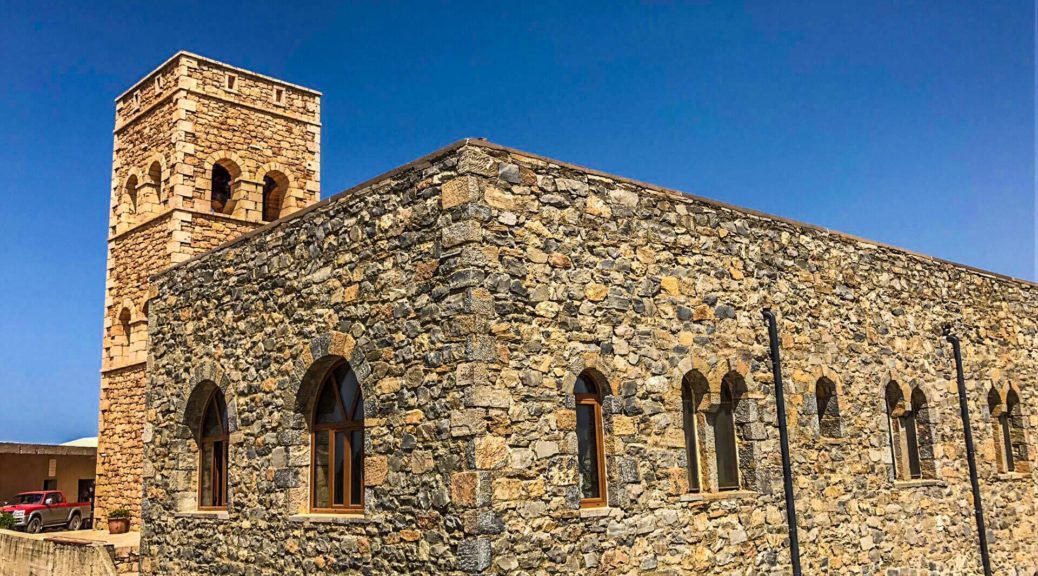 The Monastery of Panagia Kyra Eleousa is located 1.5 km northeast of the village of Voritsi. Until a few years ago the monastery was deserted but with the care of the monk and the inhabitants of the area, the monastery has been restored and is active, after many years.

It is one of the most remarkable monuments of monastic architecture in the area and visitors can now observe many of its architectural parts, completely restored. Some of these include the wall with the loopholes, the monks’ cells, the auxiliary spaces and the katholikon. The monastery is built on a high and steep hill overlooking the sea and the surrounding area. Its architectural form is a fortress type, taking advantage of the natural fortification of the area. The main entrance of the monastery is located on the northeast side, while a smaller auxiliary is found on the southwest side.

Its western side is specially fortified due to the morphology of the soil. Its katholikon is located in the centre of the inner courtyard of the middle level and is surrounded by the monks’ cells and the auxiliary spaces of the monastery. Among these areas, one can distinguish the large olive mill, the rainwater collection tank and the flax. Inside the katholikon, we find two tombs that belong to monks or abbots of the monastery while just outside, next to the entrance, there is another one as well as the traces of a fourth tomb. In the courtyard of the monastery, there are tall pines and some benches where the visitor can enjoy the peace and quiet offered by the place. The monastery was built on the grounds of an older temple, perhaps ancient, as evidenced by the large stone pillar that is still in the courtyard. Another stone pillar that existed there has been used as a lintel at its South Gate, the so-called “Harasani Porta” which led to the neighbouring village of Haraso. The monastery dates to the last century of the Venetian occupation, while it is mentioned for the first time in a document of 1606. Initially, it was under the jurisdiction of the Monastery of St. Catherine of Sinai. Later, unknown when, it became part of the Monastery of Agarathos. According to other records, it was a branch of the Monastery of Agios Georgios in Aposelemi.