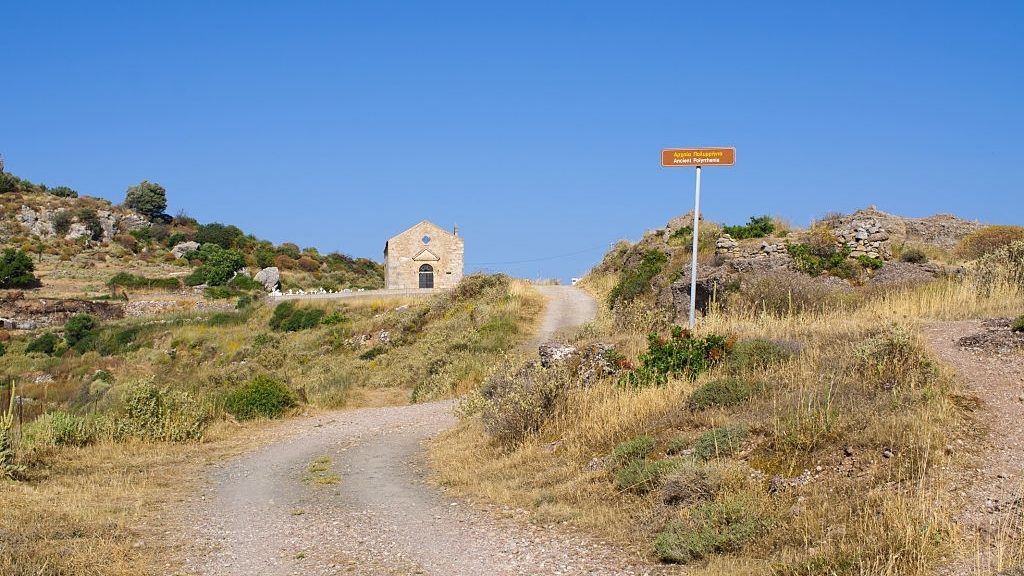 From the moment one sets foot in Polyrrinia, it is clear that this is a place with a long history that can be traced back to ancient times. Historical traces from different periods can be seen everywhere, and architectural elements remain scattered throughout the site, either on their own, in the ruins of ancient buildings, or incorporated into structures of subsequent periods.

The village of Polyrrinia is built amphitheatrically on the southern slope of a hill. This was where an ancient T-shaped citadel once existed, with magnificent views towards the Cretan Sea and the south region. Polyrrίnia was an excellently fortified city. During the Hellenistic period, it was one of the most noteworthy cities of Crete. The earliest information we have about Polyrrinia dates back to the late 4th century BC from an inscription which records a treaty between the neighbouring city of Falassarna and Lacedaemon. Numerous other inscriptions in the area, most of them incorporated into the walls of churches and other buildings, provide us with information on significant events from different periods.

Polyrrinia owes its name to the main occupation of its inhabitants, stockbreeding (in ancient Greek: ρήν(ε)α– rίnea = sheep). By the Mycenaean period, the city must have already been flourishing. It is also believed that King Agamemnon made a stop at Polyrrinia upon his return from Troy and offered a sacrifice to the gods. A monolithic sacrificial altar existed at the temple of Artemis Diktynna, at the current location of Haloklissia. Zeus and Athena were among the gods who were worshipped by the Polyrrineans; especially the goddess Athena, who was represented bearing a helmet and a spear.

At Peristerospilios (cave of the pigeons), near an aqueduct, numerous rock-cut tombs can be seen. A statue of the goddess-nymph who was worshipped in the cave has also been discovered. Most of the ruins that survive today scattered over the hill, and the architectural fragments which are now incorporated in buildings of the current village, come mainly from the Roman and the Byzantine period, and also from the Hellenistic years. Moreover, parts of the Cyclopean walls can still be seen today, indicating the efficiency of the fortification of the ancient city.

Modifications were made to these walls in almost every historical period, even during the Venetian era. The remains of the Roman aqueduct, which was probably constructed by Emperor Hadrian, are the most magnificent ruins in the area. It consisted of underground galleries (1,35 m wide and 2,30 m high) carved into the rocky hill, which led to marble fountains that supplied the city with water. The Italian archaeologist Federico Halbherr conducted an excavation and revealed a section of a wall of the 4th century BC. Later, in 1936, during another excavation, the base of a building 50 metres long and 7 metres wide, with a colonnade, was unearthed. No other systematic excavation has been conducted ever since. Many of the finds can be seen today in the Archaeological Museum of Chania.