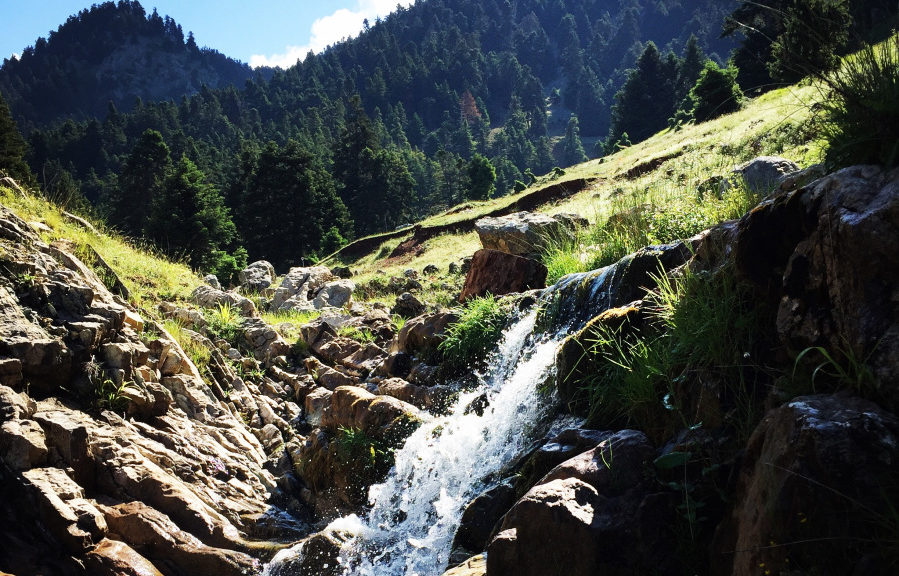 Zominthos is a small plateau on the north side of the Psiloritis mountain range in Crete. It is a 45 km distance from the capital Heraklion and a 15 km drive from nearby Anogia, the famous village and birthplace of legendary Greek singer Nikos Xylouris. It was an ancient settlement and archaeological excavations in the area are still ongoing. The trail is best attempted during the summer or spring months due to the heavy snow. From here you can also continue onwards to the village of Rouvas through the gorge.

The E4 route from Zominthos to Nida

Following the asphalt road, immediately after the archaeological site of Zominthos, we come to a designated rest area on our right, where we find the chapel of Agia Marina (1). We continue on the main road, which meanders on the slopes and offers a view of the plateau of Zominthos.

On the low hills around the valley, a great number of shepherds’ stone huts (mitata) can be seen. Little by little, the vegetation begins to thin out; by the time we reach the area of Mithia (2), after approximately 4 km, the landscape is completely bare. At Mίthia we come upon two mitata next to the road; we also spot the little chapel of Agios Mamas, in the direction of the peak of Skinakas and the Observatory, which can both be seen far out to the south-east.

We continue for another 3 km; having bypassed a side road on our left that leads to Skinakas, we reach a flat area. On the right-hand side of the road, at the area of Petradolakia (3), we come to another group of mitata.

If we take the road from Petradolakia in a south-easterly direction, towards the Observatory of Skinakas, we reach the southern slope of the peak of Skinakas, where the Observatory is located. From this weather-beaten, bare peak of 1.752 m, the view of the whole eastern part of Psiloritis, as well as of the greatest part of the Prefecture of Heraklion, is breathtaking.

Many surprises await the visitor, in this dry -almost lunar- landscape, up until the turn-off that goes to the top of Skinakas; The weather-beaten rocks with their amazing diversity of shape and form create a natural setting of rare beauty. Leaving the flat area behind, we continue for another 500 m and then the plateau of Nida opens up ahead of us, down below. We leave the main, paved road and follow the downhill dirt road (4), which passes through a small hollow and then descends to the eastern corner (5) of the plateau of Nida. Once in the plateau, we cross it in a westerly direction, until we come to the asphalt road, the Municipal Kiosk and the water spring of Analipsi (6).