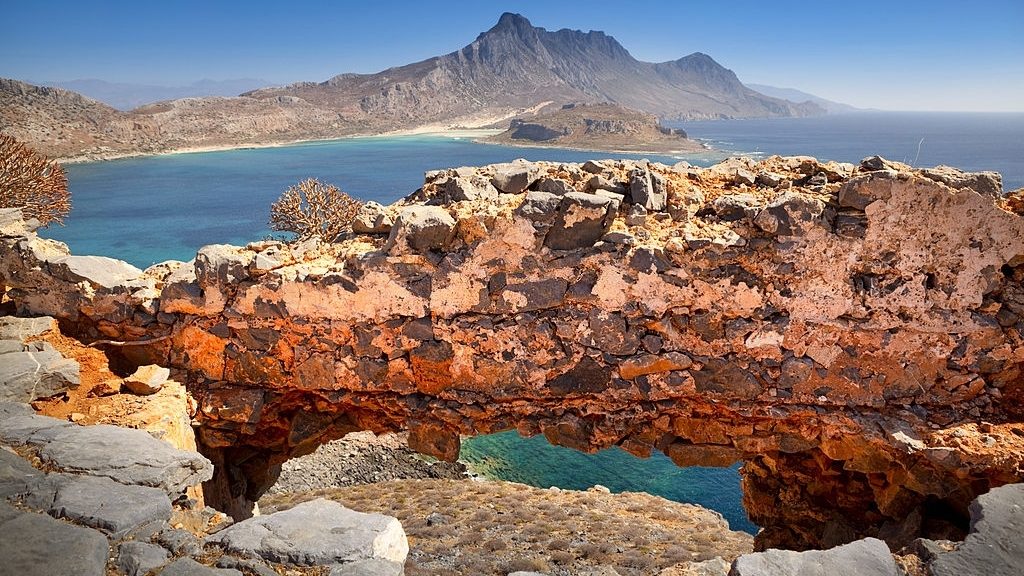 The Venetian fortress of Gramvoussa was built on the unoccupied barren island of Imeri Gramvoussa, opposite the Gramvousa peninsula. This is where the ancient town of Agneion flourished during the Roman years.

The two islands, Agria (= wild) Gramvoussa to the north, and Imeri (= tame) Gramvoussa to the west were named after the peninsula of Gramvousa. During the Venetian years, ships sailing to and from other parts of Crete and from Venice would seek shelter in the natural harbour of Imeri Gramvoussa. The Venetians built their seemingly unconquerable fortress on this steep rocky island in the late 16th century, in order to have better control of local sea routes. In subsequent centuries, the fortress of Gramvoussa played a crucial role in the affairs of Crete.

The fortress had strong walls on the three sides, while on the northern side it was naturally protected by a vertical cliff. It is recorded that it had 24 cannons, and it was supplied with water by two wells that were located close to the sea and five reservoirs built within the fortification. During the Venetian-Turkish war, the fortress of Gramvoussa did not take part in the hostilities; it remained under Venetian rule under a treaty, as did the fortresses of Souda and Spinalonga. However, it was ultimately taken by the Turks in 1692, without a fight, when the Venetian garrison commander was bribed.

The fortress of Gramvoussa played a significant role during the Greek War of Independence, which broke out in 1821. After repeated unsuccessful attempts, it was eventually taken in 1825 by the revolutionaries, and then became the centre of the Revolutionary Committee of Crete. Almost 3.000 insurgents lived on the barren island in that period; they used the fortress as a base for raiding mainland targets and enemy ships. The Gramvousa fortress soon became a centre of piracy. It was ingloriously retaken again by the Turks when the revolution was compromised. The walls and the bastions survive today in a very good condition; two large vaulted water reservoirs, a church of the Annunciation (Evangelismos tis Theotokou) and a gunpowder magazine can also be seen inside the fortress.