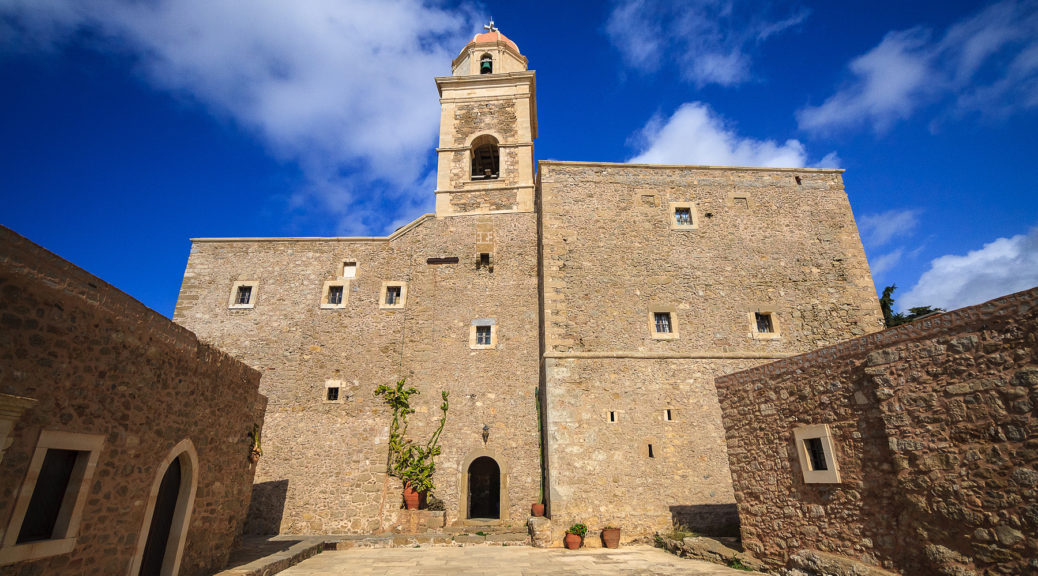 Panagia Akrotiriani (Our Lady of the Cape) Monastery, is better known as Moni Toplou and is one of Crete’s most impressive and historic monasteries. It is a true bastion and a living museum of the island’s monastic history.

Located in the northeastern part of the island, about 15 km from Sitia, it dominates the rugged and barren landscape right on the coast. The monastery had limited space inside the fort’s wall, so to ensure the safety of all, the cells were built across three storeys. Some of the murals of its small but solemn and stirring two-aisled church that is dedicated to the Virgin Mary and Saint John the Theologian still survive and its chancel screen features noteworthy 18th century icons. The monastery was already thriving in the 15th century, as is evidenced by several icons from that period. Toplou was repeatedly plundered by pirates, as well as by the Knights of Malta in 1530, due to its location right on the coast, and was destroyed in an earthquake before finally taking its current form during the 17th century. The Ecclesiastic Art Museum houses some of Crete’s most significant icons, including Megas ei Kyrie’ (Great Art Thou, Lord) a 1770 icon by Ioannis Kornaros. The icon is made up of four main sections, further separated into 57 smaller areas, and includes hundreds of faces which come together magnificently to depict the Great Blessing of Waters. The organic vineyards on the monastery’s grounds produce wine of excellent quality and it is also possible to visit the winery. While in the area, you cannot miss a visit to the Vai Beach that is only 10 min away. Here we find the largest palm forest on the island and Europe in general.