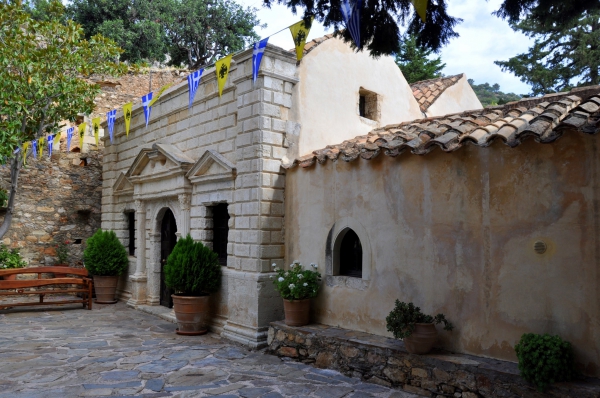 The Monastery of Attali or Bali is located in the hills of Agia Ypakoi near the coastal village of Bali and is dedicated to Agios Ioannis the Forerunner.


The area of Bali

Bali is one of the most popular holiday destinations in Crete that has drastically transformed in recent years from a quiet fishing village to a popular resort town for families and international visitors. Beautiful clear waters and sandy beaches are on offer all around the area. The ancient town on which Bali currently stands was called Astali and later became Porto di Atali by the Venetians. This explains why the monastery still carries the name Attali. The name Bali, on the other hand, is associated with the production of honey in the area (from the Turkish word “bal”).

History of the Attalis Monastery

The monastery dates back to the 14th century but there are written records from 1628 onwards. Crete, along with most of Greece, fell to the Otoman Empire after 1669 and would be under occupation for the next two centuries. Information is scarce during this period but we do know that the area played an important role during the 1821 Greek War for Independence, and the monastery suffered extensive fire damage. The secluded but coastal location made this a strategic point and aided in the supply and message exchanges with the rebel forces. After Cretan Independence and the union of Crete island with Greece, the monastery was deserted and parts of it collapsed. It reopened in 1982 after extensive maintenance work was carried out and is still in operation today.

Due to the morphology of the soil, the monastery is built on multiple levels. It also had stables, an olive mill, an oven, a fountain, a pottery workshop and the refectory, which is impressively covered in frescoes.

The katholikon is not located in the center of the monastery as usual but on the northeastern side of the complex and outside the fortress formed by the monastery. This was probably done to protect itself from frequent pirate raids from the sea. Initially, the church was one room but in the 16th century was expanded to include a double aisle.

Getting to Attali Monastery

Attali monastery is located halfway between Rethymno and Heraklion. It is only 4km away from the village of Bali.

Off the beaten track with breathtaking views of the mountainous Cretan landscape and the Sea of Crete, the monastery of Attali is a tranquil oasis. Visitors can sit quietly and contemplate, or walk around the gardens in peace.